Kia Sonet sub-compact SUV finally broke cover in production form in a world premiere organised last week. Much like Seltos, Sonet will also be offered in both GT Line as well as Tech Line.
By : Sabyasachi Dasgupta
| Updated on: 11 Aug 2020, 17:18 PM 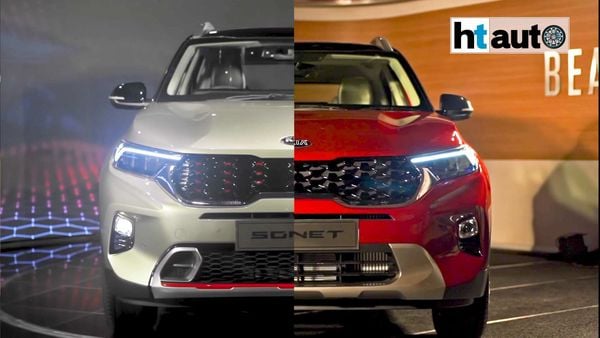 The Kia Sonet GT Line (left) and Tech Line (right) are the only two trims available for the new sub-compact SUV.

Kia Motors unveiled its third model - production version of sub-compact SUV Sonet - on July 7. The SUV, which is expected to rival Hyundai Venue and Maruti Vitara Brezza, will be offered in two trims - the GT Line and Tech Line. Kia’s other successful model - the Seltos SUV - also has two similar trims in different variants.

Kia showcased both the GT Line and Tech Line trim models during the unveiling. Here are some of the key differences between the two trims.

Visually, it is just a thin red line that separates the Kia Sonet GT Line from the Tech Line trim. The more sporty looking GT Line models are full of red accents inside and outside. The grille, skid plates, break callipers, side skirts and even the seats, steering wheel and the gear lever inside bear red accents.

These red accents are missing on the Tech Line models of Sonet SUV. In fact it gets silver accents on side skirts, break callipers, skid plates. Even in Kia Seltos, such red lines separate its GT Line trim from the Tech Line.

The red line may be the obvious and more prominent difference between the two trims. But there is much more. The air dams on both the trims have different designs. While the design on GT Line is much more sporty with a red underlining, the Tech Line has a rather simple looking design for its air dam which is silver in colour.

The colour theme of the interior in GT Line and Tech Line also has differences. The GT Line is predominantly black, with red accents, while the Tech Line has a dual black and beige theme for its interiors. The seats in GT Line only gets badging, in red again, while the ones inside Tech Line do not get any branding. Also, the AC vents have different shades - black in GT Line and silver in Tech Line.

Looks and features aside, it all comes down to how a car performs on the road to claim respect among customers. The GT Line might have an edge over the Tech Line because it gets a 1.0-litre Turbo GDi engine under its hood. The engine is exclusive to the GT Line models, offered in 6-speed iMT and 7-speed DCT transmission options.

However, the Tech Line gets a wider range of powertrains including the 1.2-litre petrol and the 1.5-litre Diesel engine options. Both engines are mated to manual gearboxes.