A number of reports in the international media puts out positive first impressions for the Sonet but also highlights that its small proportions may not make it attractive enough.Sub-compact SUVs are quite the rage in India and so, Kia Sonet rightly has its eyes set on the market here.
By : HT Auto Desk
| Updated on: 08 Aug 2020, 11:26 AM 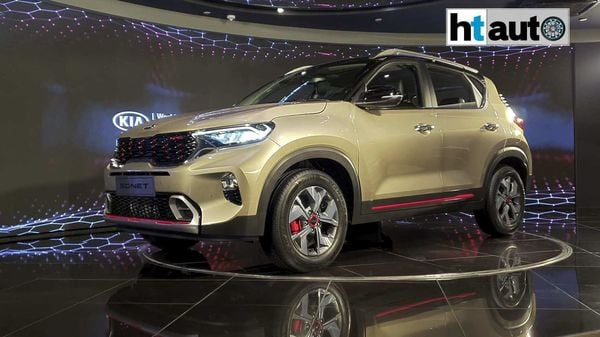 Kia Sonet was showcased in a world premiere on Friday with a firm focus on the Indian market and the needs and aspirations of buyers here. While an official launch is expected in the weeks to come, the first impressions of the Sonet have been largely positive as it ticks the right boxes in terms of proportions, design, features and cabin comfort. Indian market, however, is unique and has differences with other global markets and so, here is assessing how the world media received the Sonet.

For starters, Sonet's cabin and features have largely found favour everywhere and Kia promises that the car will be of the same build quality everywhere. To be manufactured at its Andhra Pradesh facility, the car does offer several segment firsts. Its sub-compact dimensions, however, means that it may have to work harder to find favour in markets such as the US, if and when launched. CNET's Roadshow highlighted that the US SUV-buying audience tends to prefer much larger vehicles like Kia's own Telluride and even terms Seltos as a car with a smallish profile. Sonet, then, may be just too small a car to appeal to buyers here. "And its size is about as small as its chances of a US debut. It is a forbidden fruit," the report notes.

Motortrend also underlines Sonet's smaller proportions but also mentions that it is similar to Hyundai Venue which is available in the US market. "The Sonet is a sub-subcompact SUV that looks sort of like a squished mashup of a Sportage and a Seltos, with dinky little wheels and a bubbly roof," its report informs.

It may well be true that Sonet cuts across as a rather 'cutesy' car in the US market where large SUVs and pickup trucks are common sight. There is no word on whether Sonet will indeed be brought to American shores but it could well be a solid option in developing markets.

A report on Motor1 for the Brazilian audience appears more optimistic in its reception towards Sonet. "The compact initially debuts in the Indian market (where it will be produced), but already makes it clear that it will have global reach and will reach the most varied countries," the report notes.

Down Under, in Australia, reports suggest that it is unlikely for Sonet to be brought here. Car Advice notes that the market here will see Kia drive in Stonic which is described as a 'light SUV' and so, Sonet may not be considered at all.

Clearly then, the global media had its attention firmly fixed on the unveiling of Kia Sonet and while most agree it is a credible package, the views differ owing to the unique nature of different car markets around the world.