Kia Sonet brags of several segment first features and the production version bears several similarities to the concept form previously showcased.Sonet is expected to be officially launched in the festive period.
By : Shubhodeep Chakravarty
| Updated on: 07 Aug 2020, 15:33 PM

Kia Sonet sub-compact SUV finally broke cover in production form in a world premiere organised on Friday. The sub-compact SUV was showcased in concept form at Auto Expo 2020 and the production version bears several similarities with it as it hopes to lock horns against Hyundai Venue, Maruti Suzuki Vitara Brezza and Mahindra XUV300 once launched around the festive period.

Sonet showcased by Kia hopes to make an indomitable mark in an extremely lucrative - and tightly contested - segment courtesy its looks, features and engine options. The car gets what Kia terms as 'Crown Jewel' LED head lights with LED DRLs which are integrated with side turn indicators. Other highlights here include 'Turbo' shaped front skid plates.

Much like the Seltos, Sonet will also be offered in both GT Line as well as Tech Line. The GT Line seeks to give the car a more sporty visual appeal - on the outside as well as in the cabin, and gets red colour accents on the large and imposing front grille, a red strip on the side and continuing highlights over at the rear.

The rear of the Sonet gets smart-looking tail lights which are connected with a reflector garnish. This lends the car a wider visual profile, able complimented with a sporty dual muffler design and diffuser fin rear skid plate. 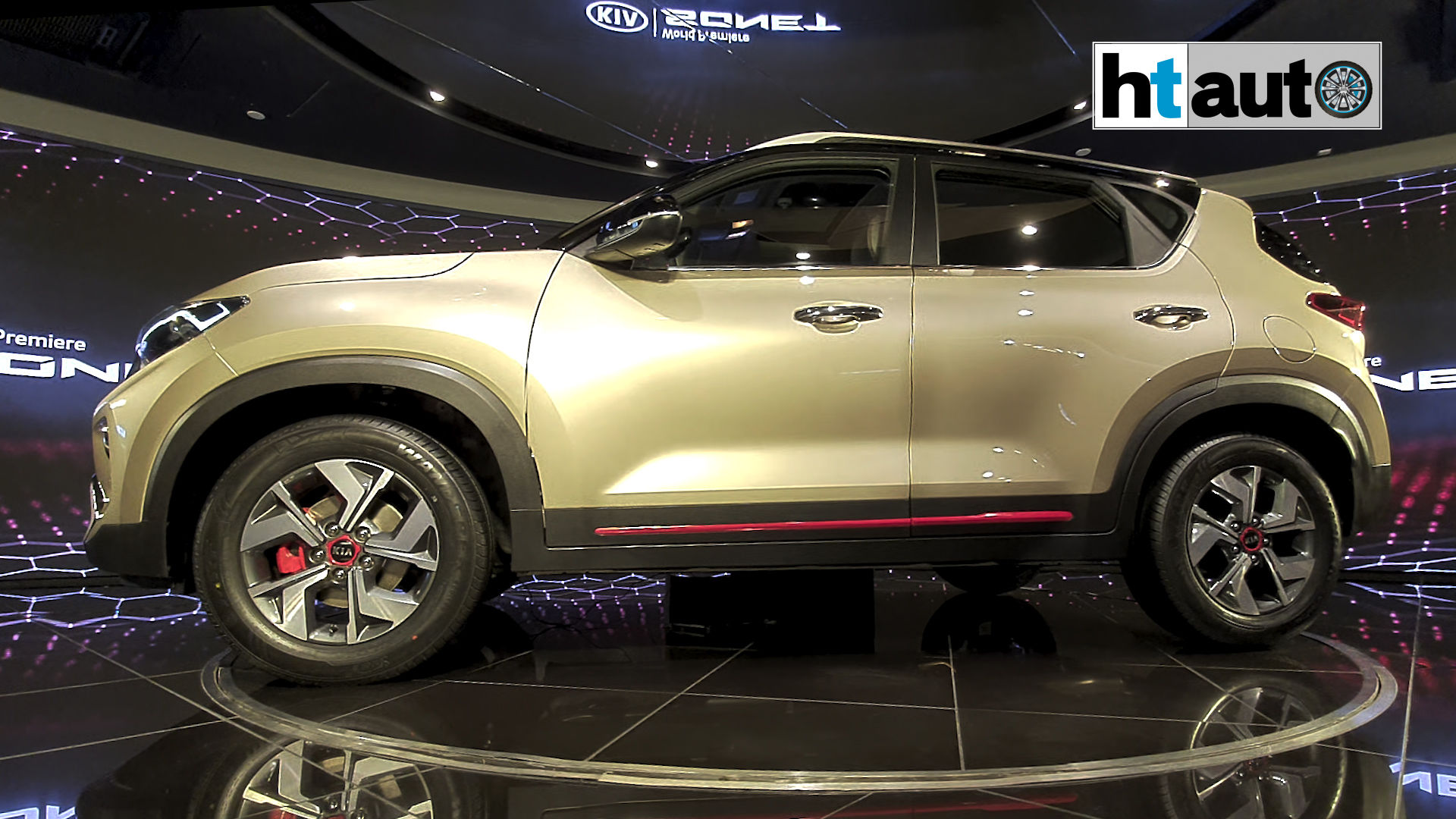 The 16-inch alloys on the GT Trim of Sonet makes the car look even more sporty. (Photo: HTAuto.com)

Sonet will get two petrol engine options – the refined Smartstream 1.2 and the performance-oriented 1.0-litre Turbo GDi. There will also be a diesel engine option.

There is much happening on the inside as well. For the audiophile, Sonet comes with Bose seven-speaker system with sub-woofer and LED Sound Mood Lamps. Kia says the cabin has been given a modern and dynamic appeal, and the company may have a primarily younger buying audience in mind for the car.

A large 10.25-inch HD screen adorns the dashboard of the Sonet and it - much like Seltos - gets UVO connectivity options. Apart from the usual AV duties, it puts out live traffic information and will get Over-The-Air (OTA) map updates. A wireless smartphone charger with cooling function has also been incorporated.

Sonet's cabin gets a smart air purifier which boasts of virus protection.

The much-touted six-speed iMT (clutch-less transmission) option will also be available and while Hyundai beat Kia to it by offering it in Venue in July, it could still stand out as a deciding factor for the Sonet. Kia says the technology offers the best of both worlds and eliminates the need to press the clutch while retaining the thrill of manual gear shift.

The Sport Trim features a D-cut steering and red stitching which is also present on the seats and door armrests.

Once officially launched, Sonet seeks to project itself as a strong and complete package with looks to back its case in its segment. The segment already has power players and is also looking at newer entries like the Nissan Magnite in the times to come.