Rolls-Royce Boat Tail, the most expensive car in the world, breaks cover The 2021 Rolls Royce Boat Tail has made its debut with the brand's Architecture of Luxury platform.

Would anyone spend more than ₹200 crore on a car just to get that luxurious car with a boot that resembles a boat tail? Even if it is stacked with some of the most expensive drinks and an independent set-up perfect for a romantic outing? Well, it is a Rolls-Royce, for crying out loud. But there is a whole lot more that demands a premium that may sound absurd, even if you are a billionaire.

The name Boat Tail refers to the Rolls-Royce car's rear which is shaped like a J-class racing yacht. It took more than four years for Roll-Royce employees to hand-build this car. Only three models of the 2021 Boat Tail will see the daylight.

Rolls-Royce had built the Sweptail car on the basis of request from a very wealthy European. The 2021 Boat Tail is no exception. According to Rolls-Royce, the three patrons who coordinated with the brand's designers to build this super-luxury vehicle, shared a single demand: "Show me something that I have never seen before." 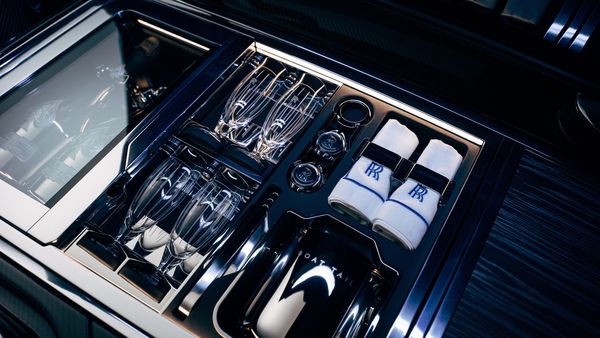 The back deck opens up to reveal cocktail tables, fridges for champagne and more.

The cherry in the car's design is at the rear, which resembles the back of a luxury speedboat. Under the two Caleidolegno wooden lids are housed two exquisite compartments. The lids open like butterfly wings to reveal the boot space which open up like the most refined outdoor set-up. Inside, one would find a dual champagne cooler which was customised by the owner along with Rolls-Royce designers, to fit bottles of the patron’s favourite Armand de Brignac vintage. On the other side is a set of crockery by Christofle of Paris. Even the smallest items here are engraved with the car's name to give them an exclusivity. The on-board fridge also keeps the Caviar cool besides other food compartments.

The car has an exclusive sun visor, more expensive than many modern cars. It protects the occupants from the sun, for whom picnic chairs with a carbon fibre frame have been designed. Removable trays keep snacks at a comfortable height. As if this were not enough, the Swiss watchmaker Bovey 1822 has created an exclusive watch for this Boat Tail. There is also a 15-speaker sound system that has been modified to use the car's platform as a sound box.

"What you see here in the back is probably, technically, the most refined picnic facility on Earth," said Torsten Muller-Otvos, CEO of Rolls-Royce Motor Cars.

Would you still be interested in the specifications of this car? Well, for the record, the 2021 Rolls-Royce Boat Tail is powered by the same engine used in the Cullinan, Phantom and Black Badge. The V12 6.75 biturbo engine is capable of generating 563 hp of power.