For 2023, Rolls Royce has made some cosmetic changes and feature additions to the Phantom Series II.

Rolls Royce has added a new garnish above the Pantheon Grille and above the LED Daytime Running Lamps. The grille itself has been slightly revised to look more modern and classy. Because of the subtle changes, the Spirit of Ecstasy is now more prominently visible from the front.

The headlamps have also been revised and now come with bezel starlights. This has been done to give a visual connection between the headlamps and the Starlight Headliner. Rolls Royce has also updated the alloy wheels of the Phantom II. They are now made up of stainless steel, have a 3d design and triangular facets. They can be commissioned by the customer as fully polished or part-polished. 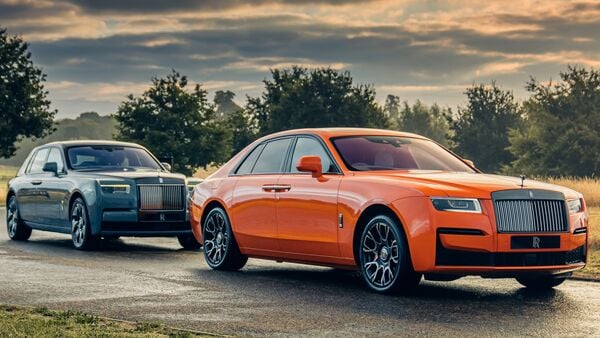 There are no mechanical changes to the Phantom Series II.

Rolls Royce is also offering a new set of disc wheels which are a throwback to the 1920's Rolls Royce cars. These disc wheels are available in both polished stainless steel and black lacquer.

Now, the customers can get Phantom with darkened chrome grille surround, black bonnet reins, windscreen surround and side frame finishers from straight out of the factory. The rest of the cabin of Phantom II stays the same. So, it comes with reclining seats, Starlight Headliner, rear entertainment screens, a refrigerator, folding tray tables and much more. This year, Rolls Royce has added connected car technology to the Phantom II.

The 2023 Phantom Series II comes with the same 6.75-litre petrol engine that has been twin-turbocharged. It produces 563 hp of max power and a peak torque output of 900 Nm. It is mated to an 8-speed automatic transmission only.