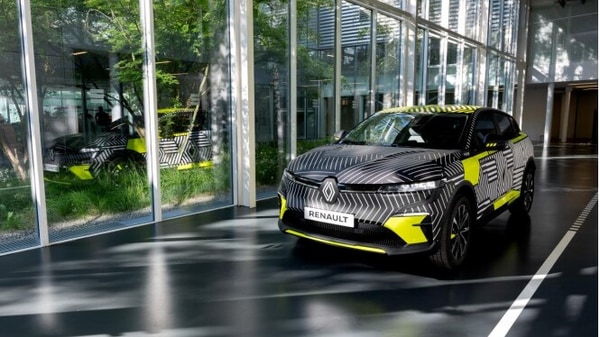 Renault recently revealed the first images of the Megane E-Tech Electric. It is based on the Megane eVision Concept that the French car maker had revealed in its 'Renault eWays: The Challenge towards Zero Emissions' event last year. It is the company's first step on C-segment electric vehicles that will join the A-segment Twingo E-Tech Electric and the B-segment Zoe range.

Going by the photos of the electric car, Megane E-Tech Electric seems to be a mix between a conventional hatchback, a crossover, and a multi-purpose vehicle. According to reports, the EV will be based on a modular CMF-EV platform. It will be powered by a 217-hp electric motor and a 60-kWh battery pack and will provide a range of 450 km between two charges.

The company stresses the pronunciation of the EV is “Mégane e" and it has also stated that the electric car's final silhouette is ready for open roads with a fleet of 30 pre-production EVs. These will be driven by the brand's engineers.

Manufactured in the Douai factory, all the pre-production electric cars will be covered with a pattern from Renault Design. “Consisting in a play of lines and patterns from our new and iconic logo, this design creates a dazzle-like camouflage," said the company.

Renault had also announced that it will launch its first electric SUV Megan E-Tech early next year. The French auto giant said that the Megan E-Tech will be one of the first electric vehicles out of the 24 new models that the company aims to launch by 2025. It will also be the first vehicle based on the new CMF-EV platform. It is the same platform on which the Nissan Ariya is based and that was developed for all new electric vehicle models of the Renault-Nissan-Mitsubishi Alliance. Renault has also aimed to produce zero-emission machines by 2030.