Renault Kiger in showcar form has been revealed and the company says it is 80% similar to the final product version.Kiger has been built on CMFA+ platform and promises roomy cabin and an all-new turbo engine.Renault Kiger will be first launched in India before making its way to other markets.
By : HT Auto Desk
| Written By : Shubhodeep Chakravarty
| Updated on: 18 Nov 2020, 15:23 PM

Renault Kiger in showcar form. The sub-compact SUV from the French car maker will be launched in India soon.

Renault has officially named its upcoming sub-compact SUV as Kiger and is preparing it to enter the lucrative but closely-contested segment which features the likes of Maruti Suzuki Vitara Brezza, Hyundai Venue, Mahindra XUV300, the newly-launched Sonet from Kia and Urban Cruiser from Toyota as well as the upcoming Nissan Magnite. The sub-compact SUV segment in India has grown by leaps and bounds in recent times with multiple options for prospective buyers and it is this rapidly expanding increase that Renault Kiger is looking at tapping.

Renault currently offers Kwid, Triber and Duster in the Indian market with the first two products enjoying decent levels of success in their respective segments. It is the Kiger though that will carry maximum weight of expectations because of the segment it will compete in once launched. The showcar version has been officially revealed and the car maker says the final production version will be 80% similar to this. It is also confirmed that Kiger will get a brand-new turbo petrol engine and promises a roomy cabin with large cargo area. 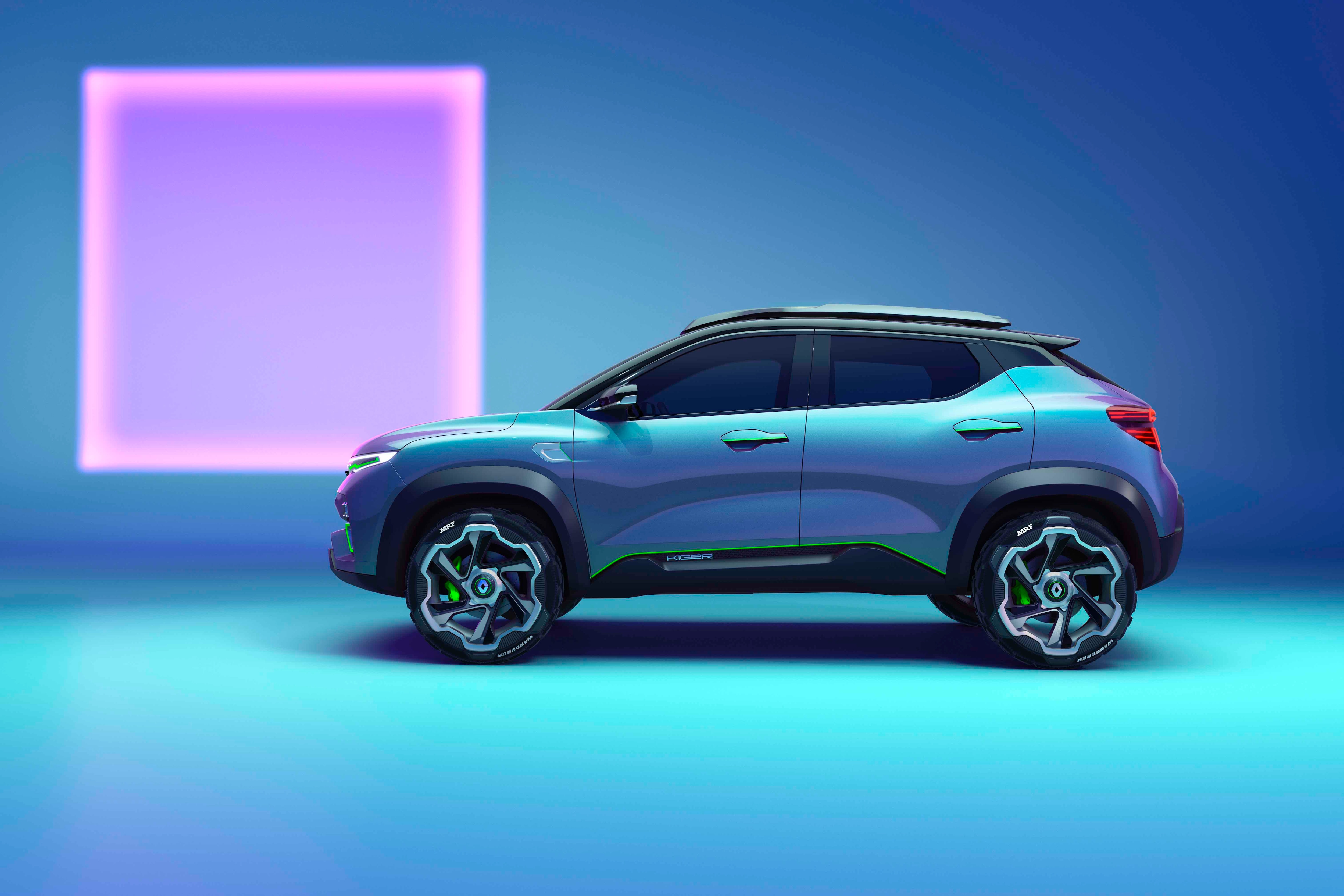 Renault promises a host of segment-first features that will highlight Kiger.

It is in its styling that Kiger is hoping to make the biggest mark and the showcar version reveals two-level of full LED headlights, neon indicator light, C-shaped tai lights, a ground clearance of 210 mm, 19-inch wheels, roof rails and front and rear skid plates. 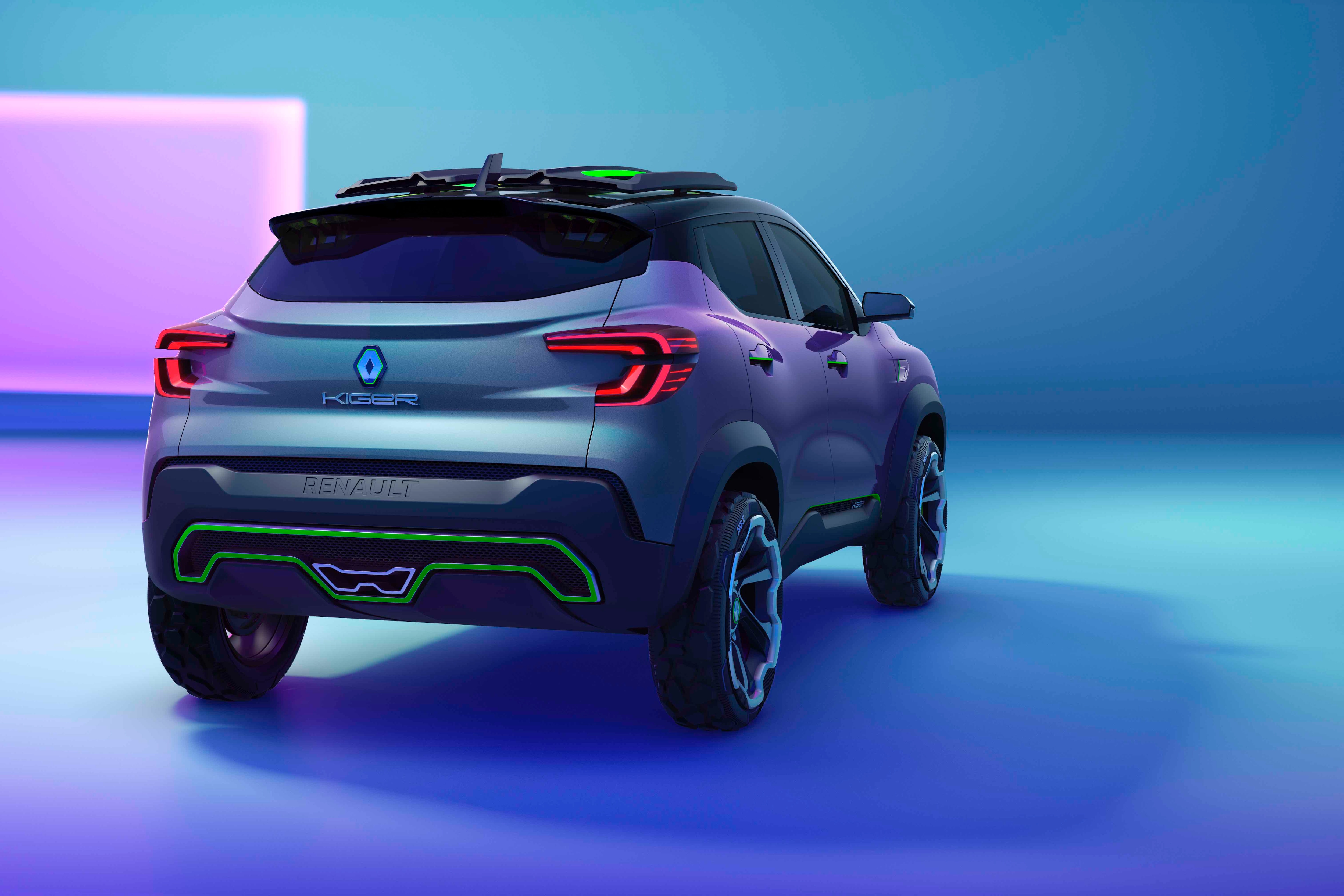 Renault Kiger in showcar form looks appealing, thanks to its blue and purple hues.

Kiger is based on the CMFA+ platform that also underpins the Triber.

Expect Renault to walk the extra mile to load up Kiger with features because this is a keen focus area for buyers in this segment. A large infotainment screen with support for Apple CarPlay and Android Auto is a given while premium sound system, wireless phone charging, steering-mounted controls and ambient lighting may also find a way in.

Little wonder then that Renault is pinning a lot of hopes on its next big-ticket product with Kiger being launched in India before heading to other markets. "We are delighted to announce that the global launch of Renault KIGER will be in India, after which it will be launched in other markets across the world. After KWID and TRIBER, Renault KIGER is the third global car from Groupe Renault to be launched in India first, followed by other markets," informed Venkatram Mamillapalle, Country CEO and Managing Director, Renault India Operations. "Renault Kiger will exemplify disruptive innovation. It will be launched in the B-segment, which accounts for more than 50% of the total industry sales, thereby enabling us to grow our presence across the country."

Renault has also been simultaneously working on expanding its sales and post-sales network in the country. The company recently informed that it now has around 415 sales and more than 475 service touchpoints here. As such, this could also be a shot in the arm for the Kiger if it looks at challenging the dominance of Brezza and Venue in the country.

Renault has not officially confirmed a launch date for Kiger but it is expected that the car could be driven out in the early parts of 2021 and at a price proposition that could be compelling.