Renault Duster has an emotional appeal for many but its ageing looks and jaded cabin are under pressure from rivals.Can a new and more eager heart under the hood revitalize Duster?
By : Shubhodeep Chakravarty
| Updated on: 04 Oct 2020, 08:41 AM 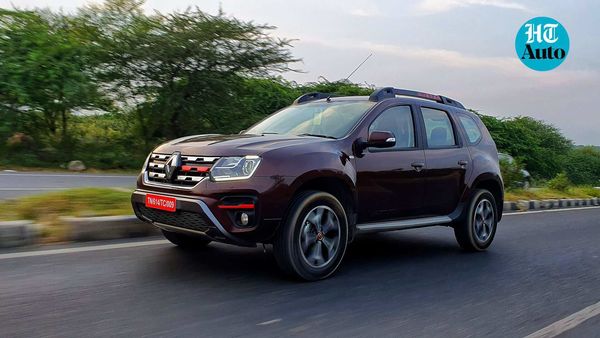 Renault Duster caught my imagination from the first time it was launched in the Indian market. As a 20-something cub journalist, it was quite the aspirational vehicle for me - muscular visual appeal, SUV proportions and a cabin which was rather elegant in its simplicity. It was 2012 and time flies even if Duster itself couldn't after an initial burst of massive success. In came a certain Korean rival and snatched all the limelight away. Heck, even I switched loyalties to eventually save up and bring the Korean compact SUV home rather than saying salut to this French offering.

It is 2020 and Duster remains confined to the sidelines in what has now become a significantly enlarged segment, competition in which is intensely cut-throat. So how does a car, one of the oldest in its segment, seek to reinvent itself. Why, turbo power of course.

Renault launched the 1.3-litre turbo petrol Duster in the Indian market in August and I recently got a review unit to find out what the veteran fighter can pack in in what may well be its dusk years. 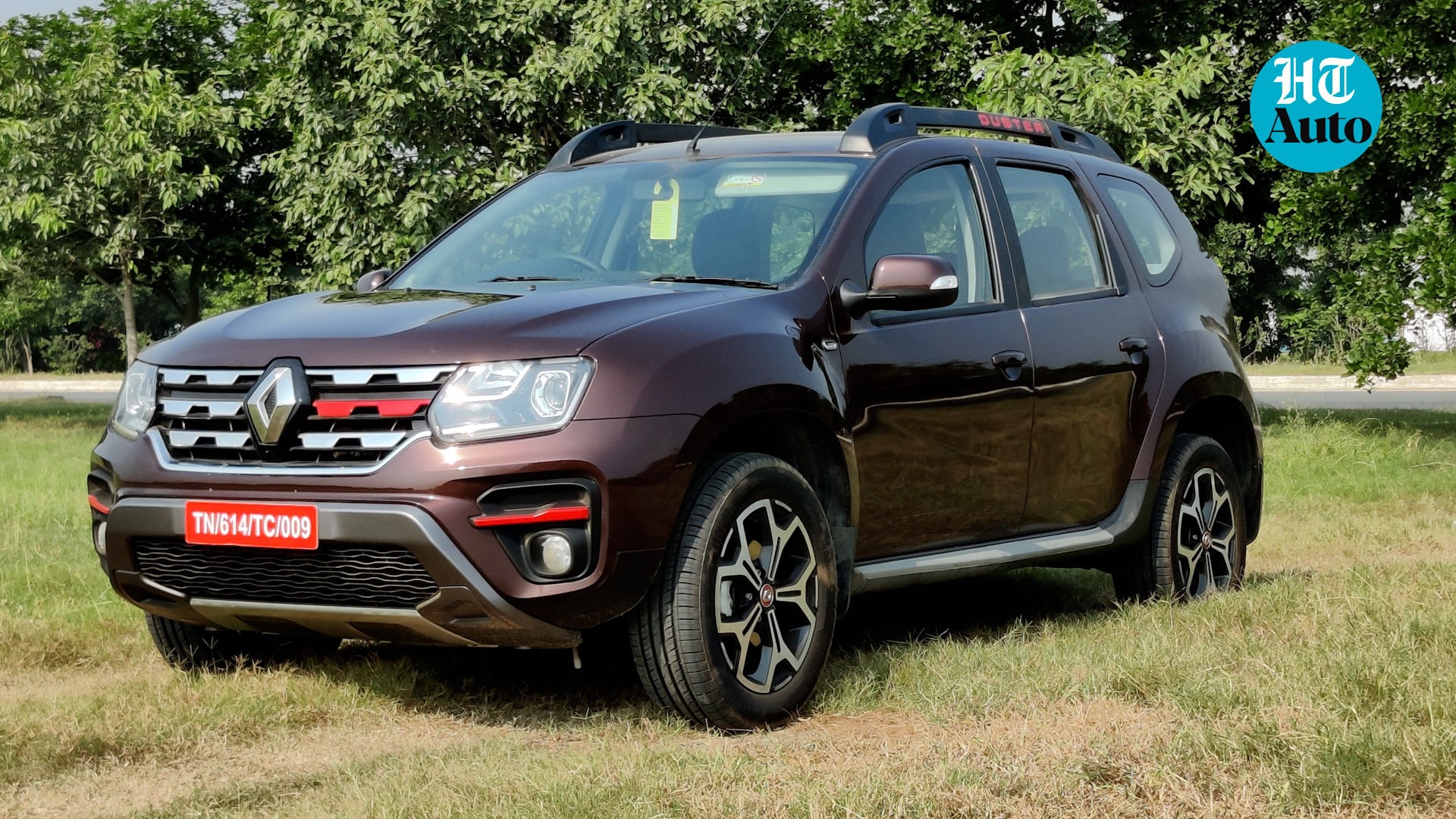 Duster Turbo gets minor cosmetic updates to distinguish it from the regular Duster. (Photo - Sabyasachi Dasgupta)

The Duster Turbo makes a brave attempt to look rugged. After all, looks are a key deciding factor for buyers in this segment. And so, while the Duster Turbo still is unmistakably Duster - not that that is a point to be taken against it, it gets cosmetic updates like red additions on the chrome grille at the front, red hues on the section just above the fog lamp, new and very, very good looking 17-inch diamond-cut alloys and a prominent Duster badge on the roof rails. 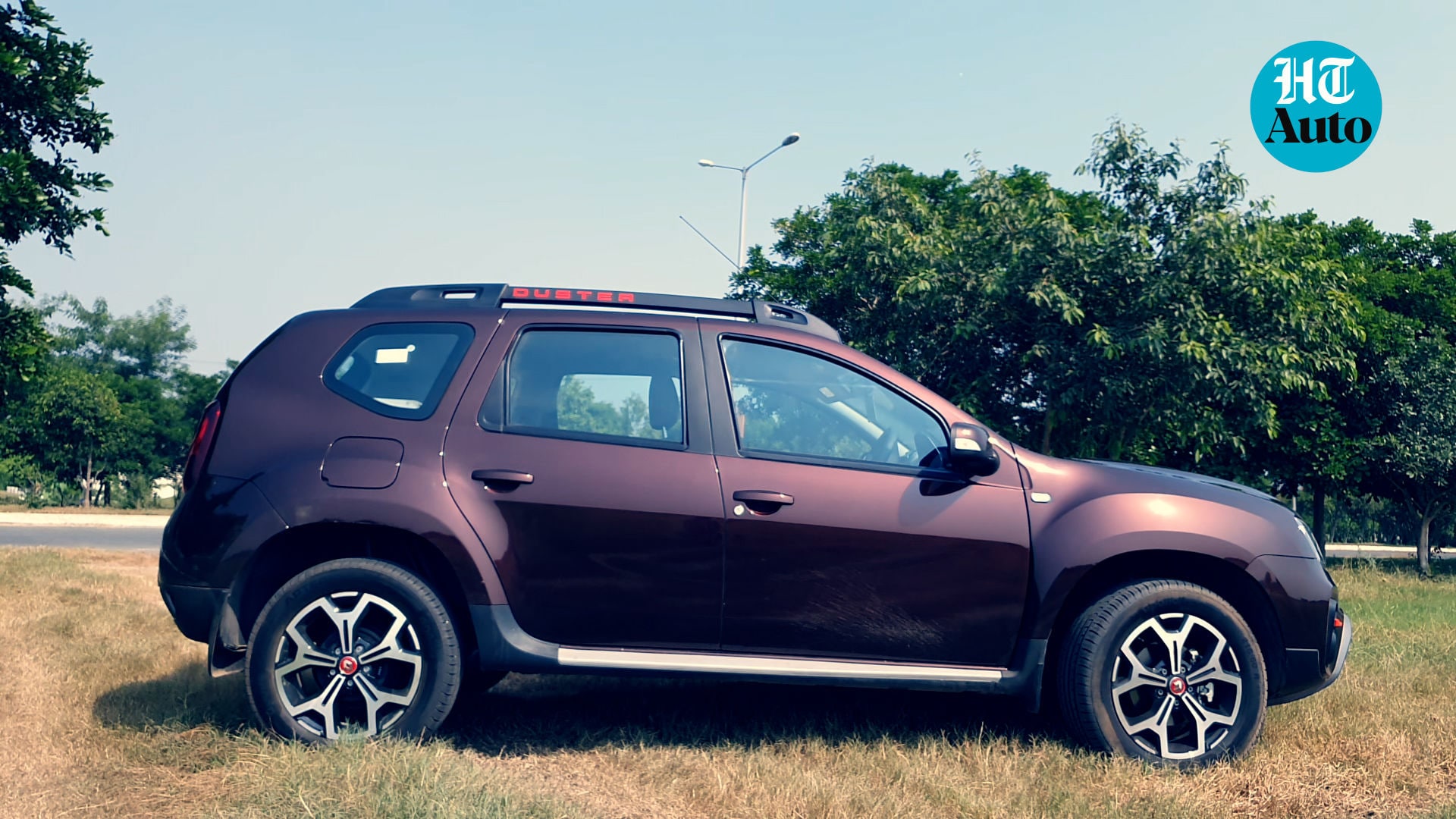 There is also a 'Turbo' tag at the rear.

While the car otherwise is almost entirely similar to the face-lift Duster introduced in 2019, the additions of Turbo-related visual cues do manage to give a certain fresh appeal. It isn't going to turn heads but may still evoke second glances.

Step inside though and the Duster Turbo remains a rather plain Jane offering - no body shaming intended. Bare minimums like auto AC, rear camera, driver armrest and engine start/stop switch are features that stand out because there isn't much to stand out here anyway. And while the driving position is as good as ever, Duster's cabin still feels like a bowl of cereals against the buffet offered by rivals. 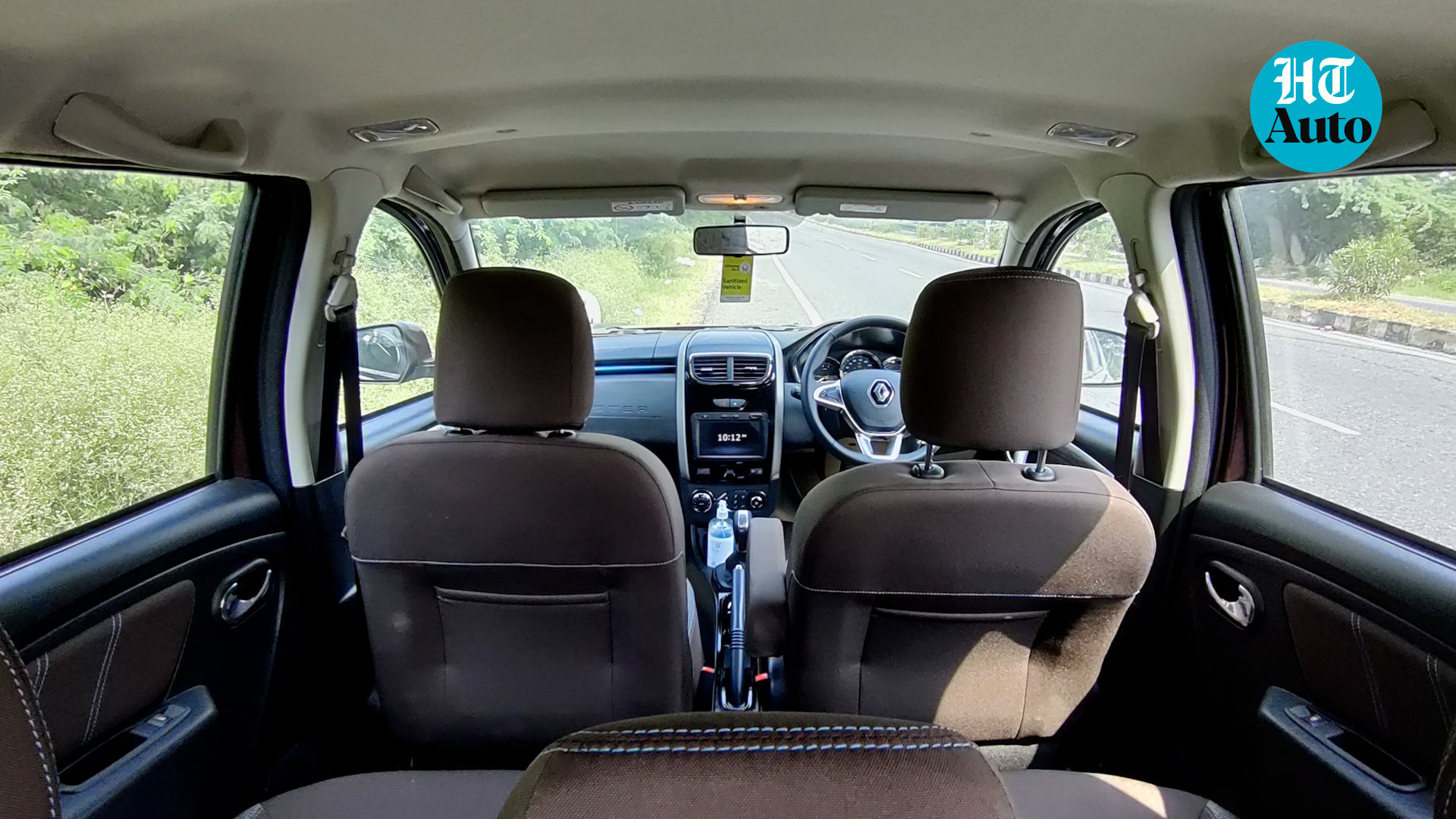 The cabin of the Duster Turbo, while remaining spacious, is still quite old school. (Photo - Sabyasachi Dasgupta)

It is all in the moves

What Duster Turbo lags in terms of cabin features, it seeks to make up for in its drive handling character. After all, the car has always been raved about for its demeanor while on the move and it is the turbo engine now that is seeking to drum up some excitement.

On paper, Duster Turbo has around 152 bhp of max power. This makes it, on paper again, the fastest compact SUV available. For reference, Creta Turbo has 138 bhp of power on offer. 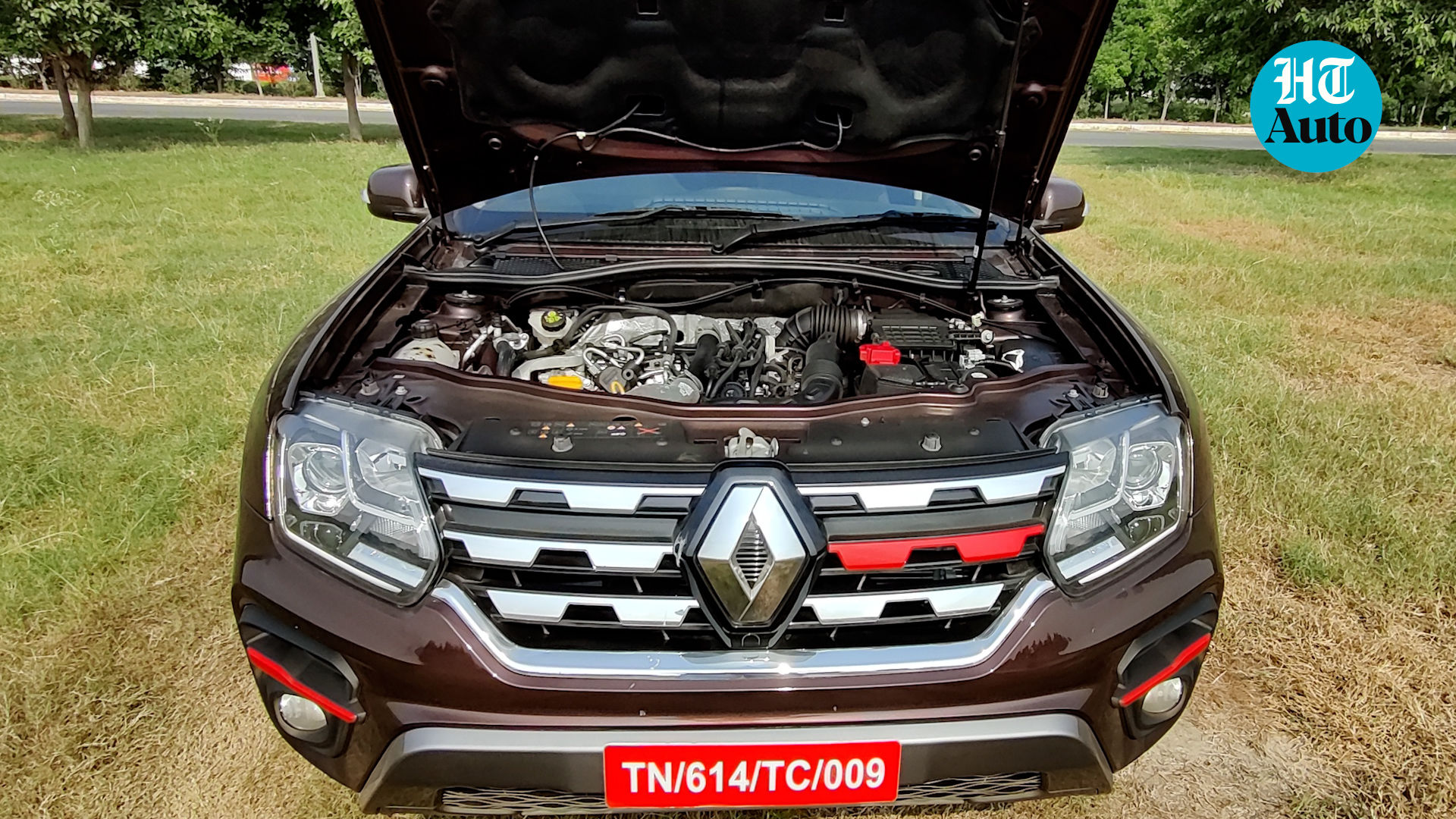 The Duster Turbo moves with a sense of purpose from the word go. I expected a sudden rush, a boosted take off, a space-craft like launch. But this here is a petrol engine tuned in a way to provide a calm surge when required, not hurl you back with its sheer, perhaps unchecked, exuberance. There is power for the taking and for someone who has been a regular in the Duster, the bump up is quite evident. Is it menacing? No. Is it confident. Sure.

The CVT transmission option compliments the engine well and the Duster keeps itself composed till about 1,500 RPM before pressing forward, if you need it to. The option to clock in the gear into a rowing manual mode makes for a more eager drive experience, especially on open roads, but having paddle shifters would have further sweetened the prospects for the enthusiastic driver.

The ride quality remains a strong point for the Duster as it masks over most speed breakers with poise, while taking corners in a planted manner that makes whatever little body roll that does occur, agreeable enough. And while the weighted steering wheel does offer a sense of familiar reliability - important because triple-digit speeds would be easier to reach with that turbo engine under the hood, it doesn't necessarily take away the car's ability to remain moderately agile within city limits.

Where the Duster Turbo does lose points though is when being pushed to its limits because it is then that the engine noise starts creeping in inside the cabin. It isn't a massive drawback but still is enough to deserve a mention.

Deducing the Duster Turbo - a verdict

Renault is not willing to let the Duster fade away into the twilight and adding the turbo engine is a brave attempt to make a renewed case for the compact SUV which is often credited for starting it all. I really don't think the French car maker is trying to even mount a challenge to rivals with the car anymore. Because, and perhaps, they cannot.

Instead, the Duster Turbo appears directed towards the discerning car buyer, someone who appreciates the smaller details. The car now does offer more refined power than ever before and even if it is unlikely to win flat-out drag races, has a confident air that only experience seems to bring. It still, however, suffers from looks that are rather jaded and a cabin that is woefully inadequate.

For the sheer pleasure of a confident drive and good ride mannerisms at a solid price point, the Duster Turbo is recommended. Those who may not be on an absolutely tight budget and prefer a compact SUV that's got the looks and the features, apart from a more engaged drive experience, the rival camp still makes a more pressin