A Porsche 911 delivers ice cream in Chicago: There's a catch

Porsche joined hands with Pretty Cool Ice Cream company to celebrate National Ice Cream Day in the US.
By : HT Auto Desk
| Updated on: 04 Aug 2022, 09:40 AM 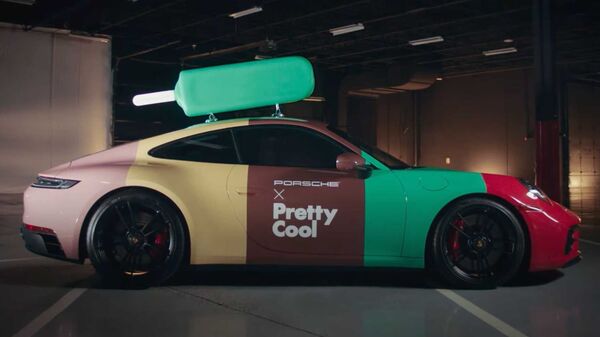 The Porsche 911 delivery car was painted uniquely in the shades that influenced the ice cream pops.

German sportscar manufacturer Porsche joined hands with an ice cream brand to bring something unique. Under the collaboration, the two companies brought a wide range of ice cream varieties that are coloured in Porsche's original shades. Also, the packaging of these ice creams too bears Porsche's touch. If that was not enough, the ice creams were delivered in a Porsche 911 painted uniquely blending all the colours from the automaker's palette.

(Also Read: How Porsche and others plotted Herbert Diess's ouster as Volkswagen CEO)

The limited edition ice cream pops were made to celebrate National Ice Cream Day on 17th July in the US. The five flavours - Mint Green, Strawberry Red, Macadamia Metallic, Frozen Berry Metallic, and Lime Gold Metallic – each have distinct recipes from the other and come inspired by Porsche's colour palette.

Dana Salls Cree, the owner of Pretty Cool Ice Cream, the company with which Porsche tied up for the project, has had a long connection with Porsche vehicles since her childhood. Her uncle used to restore Porsche cars and restored more than 200 models in 50 years. Speaking about the project, she said that similar to all Porsche sports cars, the ice cream pops are truly a passion project.