PAL-V Liberty flying car recently passed the stringent European road admission tests and it is now allowed on the streets with an official license plate.The flying car is powered by dual engines, offers self-stabilization, curve stabilization and can seat two people at a time.
By : PTI
| Updated on: 28 Oct 2020, 16:23 PM 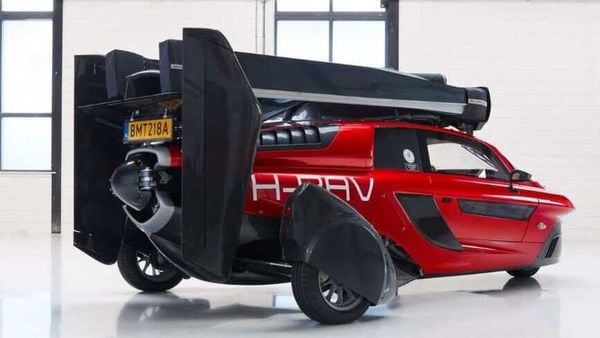 PAL-V, the Dutch company known for manufacturing flying cars, has announced that the world’s first commercial flying car - Liberty, has been approved for road usage in Europe. This brings the world closer to the reality of seeing a flying car on the regular roads.

PAL-V Liberty recently passed the stringent European road admission tests and it is now allowed on the streets with an official license plate. This followed a rigorous and extensive drive test program carried out on test tracks since February 2020 which included high-speed ovals, brake and noise pollution testing. "We have been cooperating with the road authorities for many years to reach this milestone. The trick in successfully making flying car is to ensure that the design complies with both air and road regulations," says PAL-V CTO Mike Stekelenburg.

Liberty commercial flying car starts with an entry-level price tag of $399,000 (around Rs. 2.52 crore) excluding taxes. The vehicle's test prototype was flown and driven in 2012 before the company started working on the design of its commercial product. It has also been going through aviation certification with EASA (European Aviation Safety Agency) since 2015 and the finalisation is expected only in 2022. Thus, deliveries of the product will begin only after that. PAL-V says that Liberty benefits from the certification experience accumulated in the earlier flight test program with the concept PAL-V One. Over 1,200 test reports still need to be completed before the final 150 hours of flight testing can take place for the vehicle.

The PAL-V Liberty is powered by dual engines, offers self-stabilization, curve stabilization and can seat two people at a time. In drive mode, it has a maximum speed of 160 kmph, can accelerate from zero to 100 kms in less than nine seconds and has a claimed range of 1,315 kilometers. In flight mode, it can reach a maximum speed of 180 kmph and has a range of 500 kilometers. "Liberty is very smooth and responsive to the steering and with a weight of just 660kg it accelerates really well. The overall experience is like a sportscar," says Hans Joore, test-driver, PAL-V.

PAL-V claims that its reservation book is growing rapidly. Also, as 80% of the future flyers are new to aviation, some of them have already started training for a gyroplane flying license at the PAL-V FlyDrive Academy.

The Dutch company has also signed an MOU with the state of Gujarat to establish its plant here and production is likely to commence from 2021. Production models will reportedly be exported to several European countries from the state.