Renault has introduced the Limited Edition variant at a starting price of ₹7.24 lakh (ex-showroom). The French carmaker has opened bookings for this edition from today.
By : HT Auto Desk
| Updated on: 18 Feb 2022, 01:09 PM 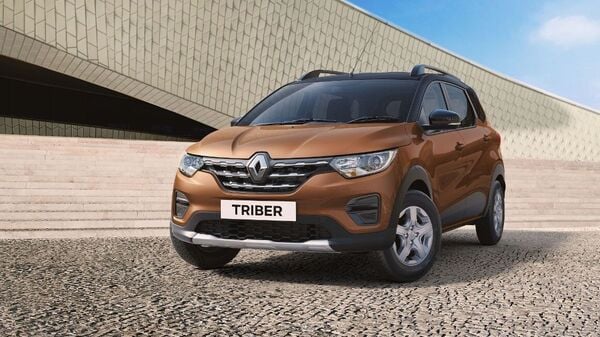 Renault Triber MPV has crossed the one lakh sales milestone in India.

Renault Triber, one of India's most affordable three-row seven-seater MPV, has cross a major sales milestone. The French carmaker has announced that it has sold more than one lakh units of the Triber MPV in India since its launch back in June, 2019.

Renault Triber seven-seater MPV is currently sold at a starting price of ₹5.76 lakh (ex-showroom). It also secured four-star rating as one of the safest cars in Global NCAP crash tests.

The Renault Triber MPV is available in four variants, which include the RXE, RXL, RXT and RXZ spec models. Though there have been several cosmetic changes and tech updates in the new Triber, the safety features remained largely similar to the previous editions.

Renault has also introduced the Limited Edition variant at a starting price of ₹7.24 lakh (ex-showroom). The French carmaker has opened bookings for this edition from today.

The Renault Triber Limited Edition is based on the RXT variant. It is powered by the 1.0-liter petrol engine which comes mated to both Manual and Easy-R AMT transmissions. The Renault Triber LE comes with new Akaza Fabric upholstery, dual-tone dashboard with piano black finish, a fully digital white LED instrument cluster, HVAC knobs with chrome ring and black inner door handles.

The Triber LE will also be available in dual tone exterior colour like Moonlight Silver and Cedar Brown with black roof. It will stand on a set of new 14-inch flex wheels.

As far as safety is concerned, the new Triber variant will offer four airbags – front and side for both driver and passenger. The Limited Edition Triber also features steering mounted audio and phone controls along with the six-way adjustable driver seat and reverse parking camera with guidelines.