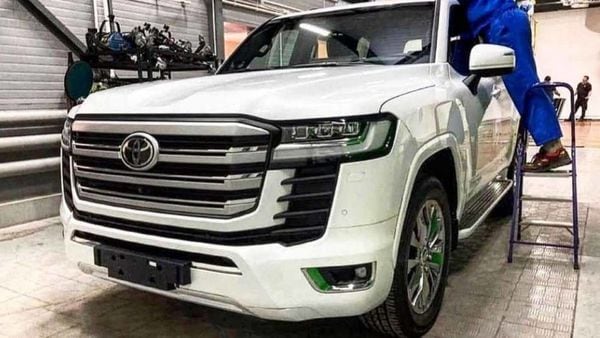 The new Land Cruiser is likely to land on the Indian shores in 2022. Image Credits: Facebook/Kurdistan Automotive BLOG

The existing Toyota Land Cruiser has reached the end of its life cycle and will soon be replaced by the next-gen model. Toyota's updated flagship SUV will make its global debut later this year. Now, the new model has been spotted completely undisguised and the spy image shows a clear glimpse of its front fascia.

The new Land Cruiser will sport a completely redesigned front-end which is a good departure from the ageing looks of the existing SUV. Albeit, the changes will be evolutionary. The image reveals that the full-size SUV continues to feature a high-set bonnet and there is a massive multi-slat grille that comes finished in satin silver and chrome. The grille is flanked by new sleeker headlamps with an embedded ice cube pattern. Below the lamps are blacked out vents lending the front a very aggressive appeal. There is a clean-looking front bumper featuring fog lamps in a chrome housing. Also, there is a slight hint of silver below the bumper, making it look more up class.

Come to the sides, and the repositioned ORVMs are quick to catch attention. The new units come mounted on the doors as opposed to the previously window-mounted ORVMs. While the rear profile stays hidden away in the picture, but it would be safe to expect that the boxy theme will be carried over to the rear section as well.

As per the previously leaked technical specifications of the new Land Cruiser, the SUV will feature multiple alloy wheel options that will range from 17-inches to 20-inches.

Expect the SUV to continue with its twin-turbo V8 petrol power plant. There will also be a 3.3L turbocharged diesel that will be offered in select markets. The new model is likely to land on the Indian shores by 2022.