Volkswagen will showcase the new Golf GTI at the Geneva Motor Show.The premium hatchback is expected to launch in the second half of the year in the United States.
By : Sabyasachi Dasgupta
| Updated on: 28 Feb 2020, 06:26 AM 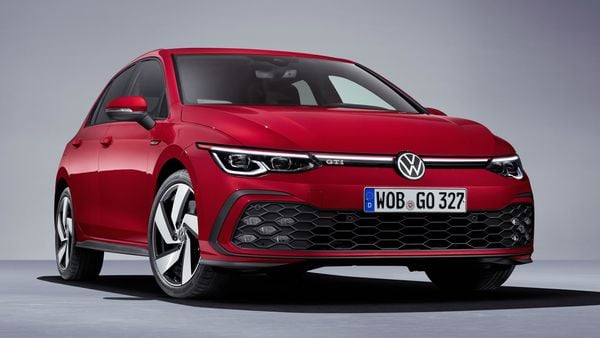 The all new Volkswagen Golf GTI has been revealed by the company in a series of pictures ahead of its global unveiling. Volkswagen is set to present the eighth generation of this popular premium hatchback at the Geneva International Motor Show from 5 to 15 March. Earlier last week, the company had revealed only a fraction of the front fascia of the new car.

Here is a look at all the details you want to know. 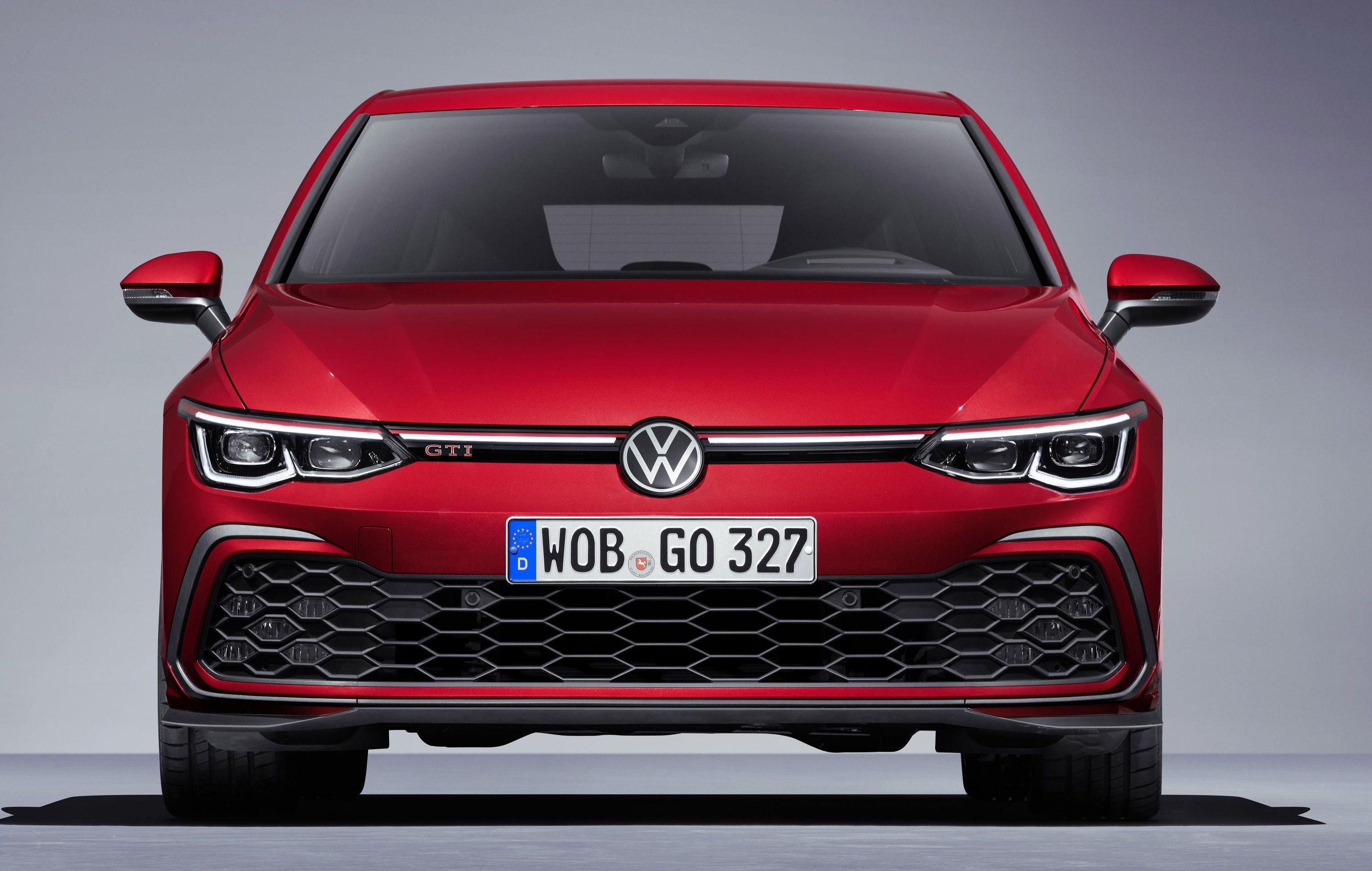 The new Volkswagen Golf GTI wears a more sporty look with fresh design elements. The standard LED headlights are positioned low down and form a striking crossbar in conjunction with the radiator grille. Towards the top of the bonnet a narrow line spans the front end – red in the case of the GTI, blue for the GTE and silver for the GTD. All are typical insignia just like the red radiator grille frame on the first Golf GTI. Once the daytime running lights are activated – when the driver approaches with the key (optional) – an LED strip in the headlight mirrors the red, blue or silver line. As standard, the radiator grille is illuminated as a continuation of the LED strip for the first time. This creates the completely new, unmistakable headlight design of the Golf GTI, GTE and GTD. Another striking and unmistakable feature is the typically large, one-piece lower air intake grille in a honeycomb pattern. It is framed on the outside by a black application, with a striking wing-like design on the sides. The new GTI insignia also include the optional fog lights which are now integrated into the air intake grille in an X-shape. 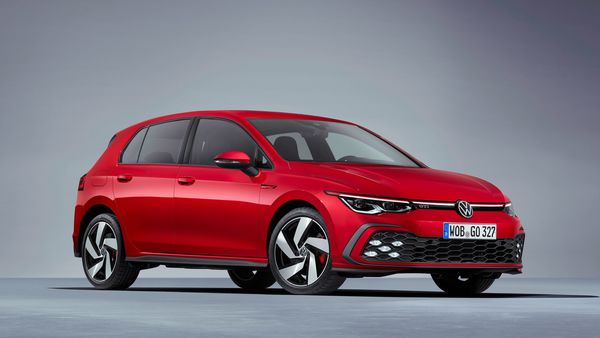 The side section features the standard 17-inch Richmond alloy wheels, unique to the GTI. 18-inch or 19-inch rims are available on request. Painted red: brake calipers of the new, sporty Golf models. The GTI and GTD also carry a signet with the respective lettering on the side of the front wing panel. The GTE does not boast this feature but instead has an extra supply connection on the passenger side for charging the battery. All three models feature wider side skirts sills in black – with a splitter design similar to that found on racing cars. The sills come together to form the front spoiler and the rear diffuser. An individualised spoiler extends the roof line at the very top of the outline. The dominant design element of the side section is the C-pillar, a characteristic element of all versions of the Golf. 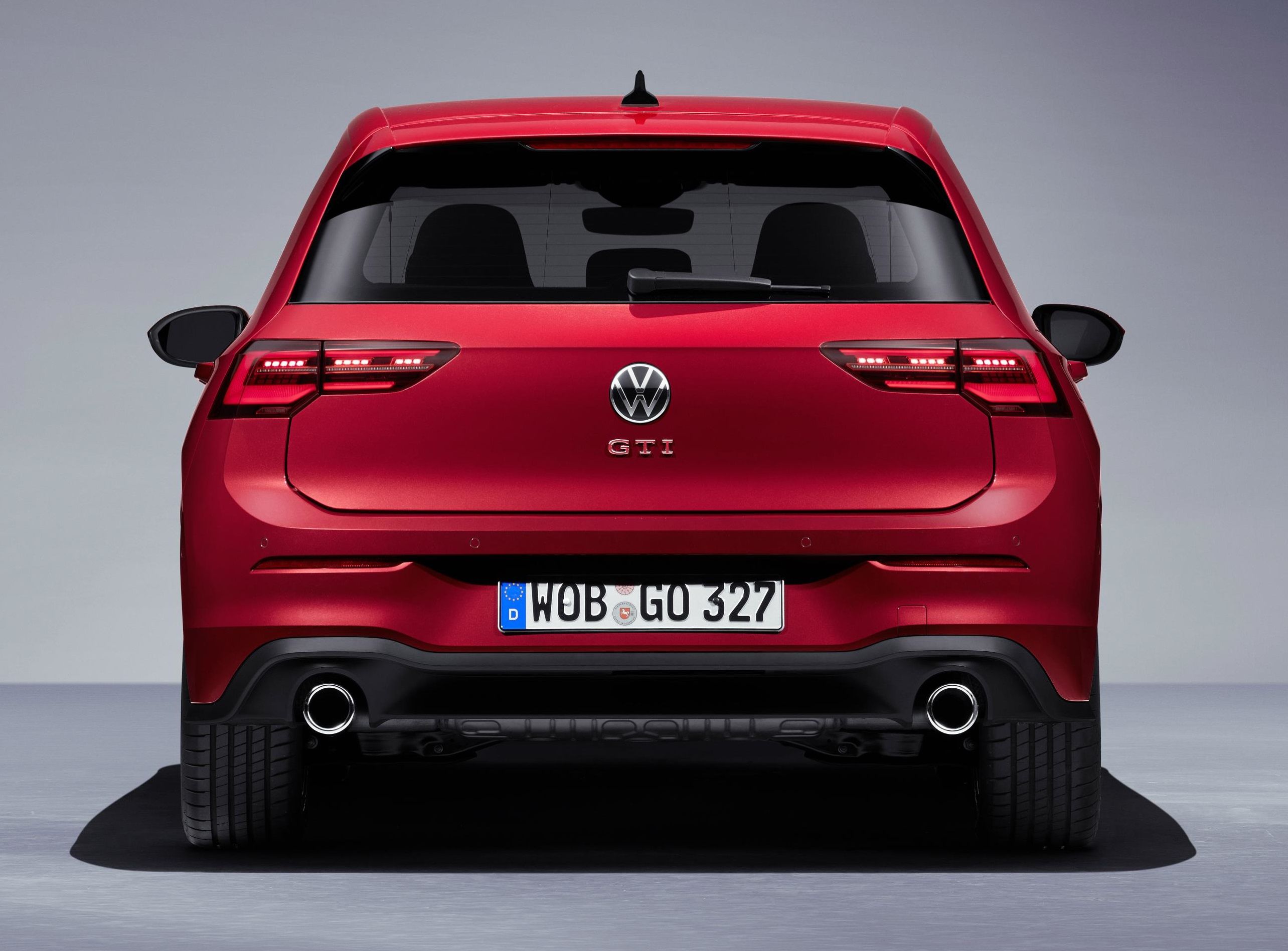 The new Golf has a powerful shoulder section and striking rear end design. This also benefits the new, sporty models, which are fitted with LED tail light clusters as standard. The GTI, GTE or GTD lettering is now positioned centrally under the Volkswagen emblem rather than on the driver side as it was before. The roof spoiler is extended rearwards and merges with the black edging around the rear window, making the Golf GTI, GTE and GTD appear even flatter than the less powerful models. At the bottom, the sporty diffuser distinguishes the new versions from the other versions of the series. They are also differentiated by the tailpipes of the exhaust systems – the GTI has one tailpipe on the left and one on the right, the GTD has a double tailpipe on the left, and there is no tailpipe in sight on the GTE. 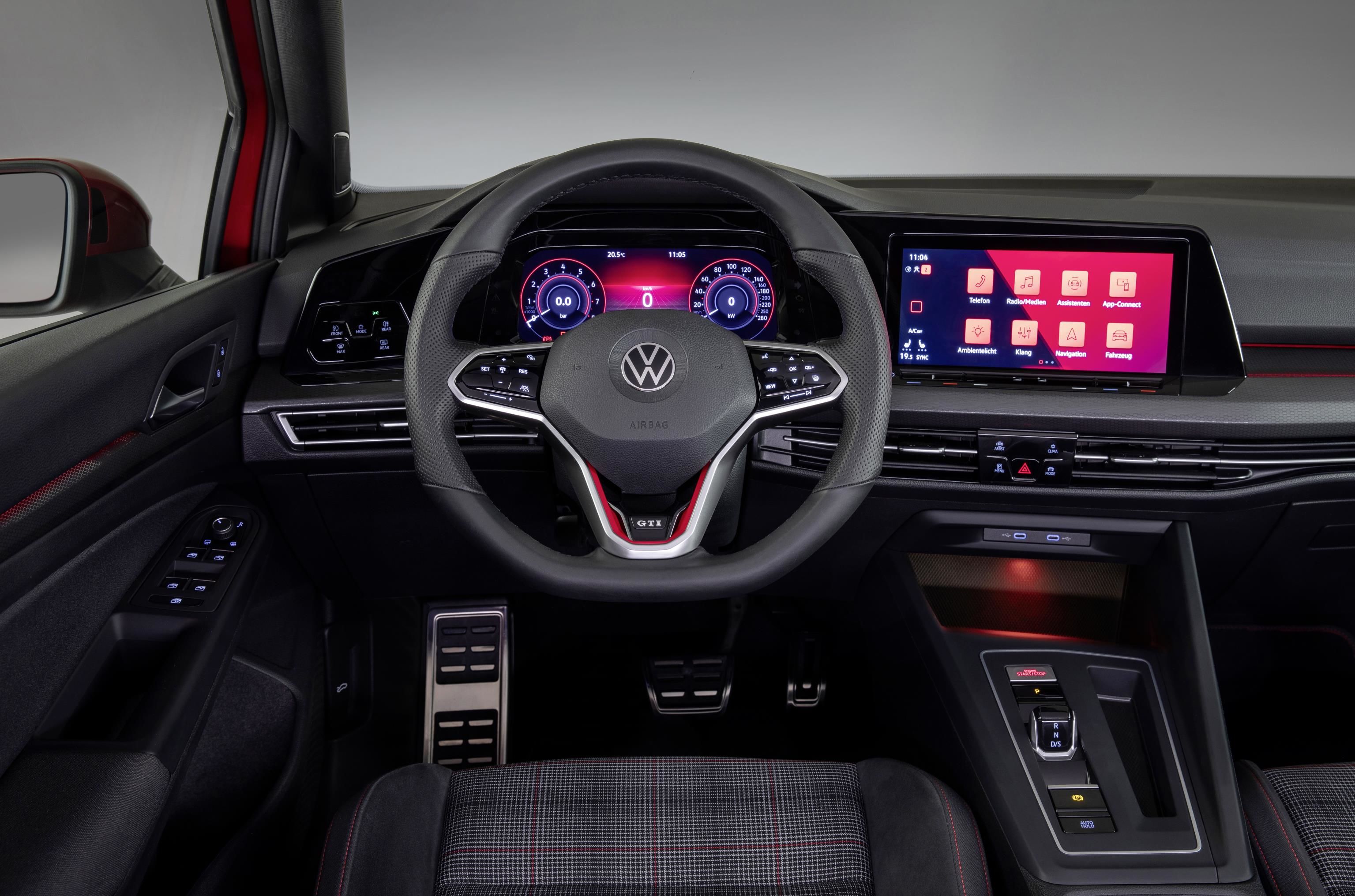 Right from the outset, Volkswagen created distinctive, dynamic insignia with the multitude of interior details. The new Golf GTI gets a sports steering wheel featuring three silver double spokes and recessed Wolfsburg emblem, a gear knob in the shape of a black golf ball, GTI sports seats in tartan with black side bolsters.

The sports steering wheel of yesteryear has been transformed into a new multifunction leather sports steering wheel with touch controls and an optionally integrated Travel Assist button to help the powerful Golf models reach a top speed of 210 km/h while Travel Assist is engaged. The three silver spokes have been retained – in the GTI, the interior of the central spoke has a red finish, while the GTE and GTD have blue and silver finishes respectively. The classic checked pattern of the sports seats is also retained. The new checked design is called Scalepaper. The seams of the grey and black design are red in the GTI, blue in the GTE and light grey in the GTD. Red, blue or black are also used for all decorative seams and edging, depending on the model. 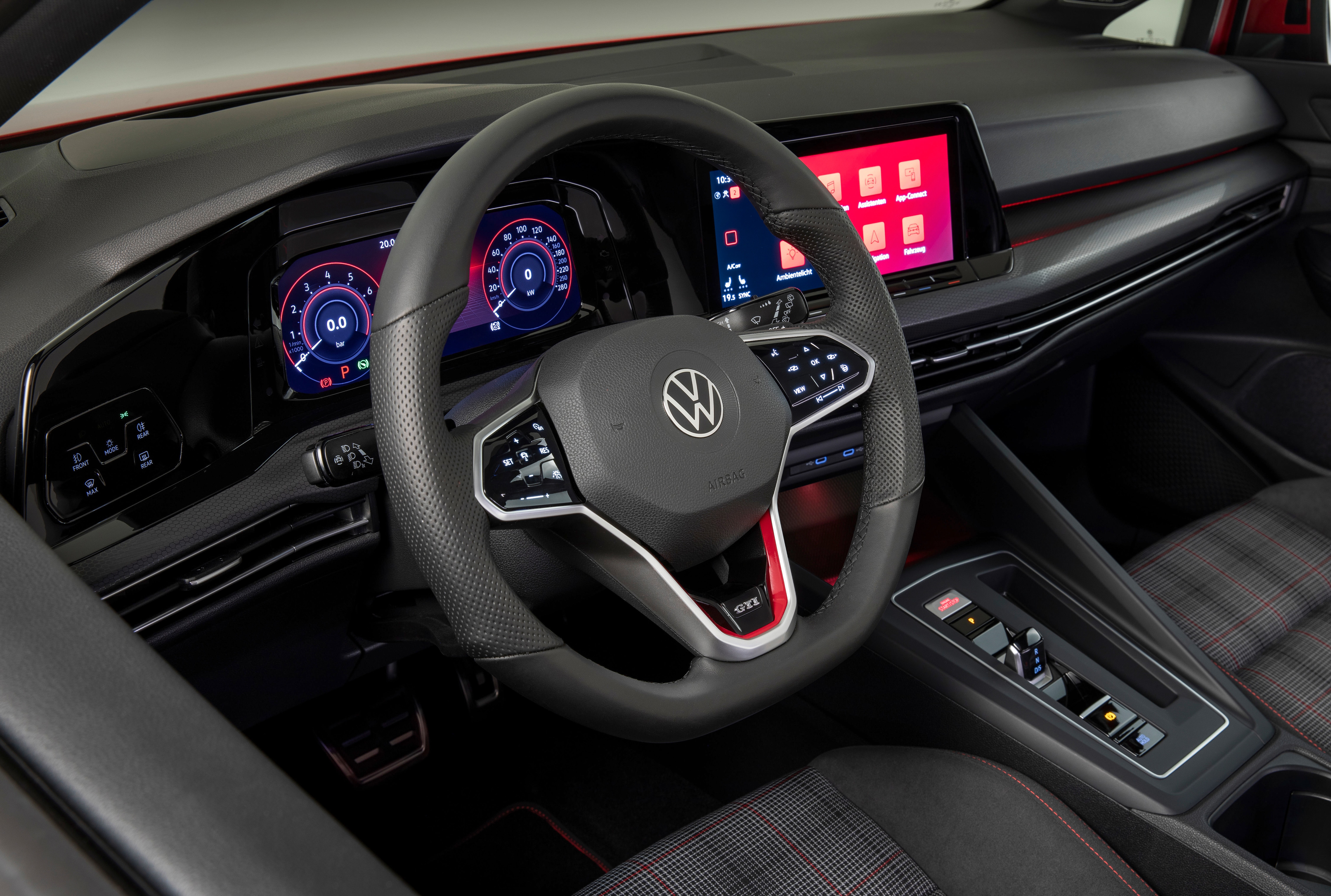 The Innovision Cockpit extends upwards upon opening the doors in the Golf GTI, GTE and GTD. It is a fusion of the top-of-the-range version of the 10.25-inch Digital Cockpit (digital instruments) and the 10-inch navigation system. The background lighting, which also comes as standard, embeds the displays and all other illuminated interior areas (dash panel, door trim, storage compartment with interface for mobile telephone, footwell) in a spectrum of 30 configurable colours.

The Golf GTI, which is equipped with a 6-speed manual gearbox as standard, features a brand new GTI gear knob. The GTI is available with an optional, automatic 7-speed dual clutch gearbox (DSG); the GTD comes exclusively with this DSG. The GTE features a 6-speed DSG developed for hybrid drive. The models equipped with a DSG are generally shift by wire; the DSG gear lever itself has been designed specifically. The functionality of the standard start/stop button for the drive systems of the three sporty Golf models has been customised – once the doors have been opened, it pulses red until the drive system has been started.

In general, every new Golf is fitted with assist systems including the Lane Assist lane keeping system, Front Assist Autonomous Emergency Braking with Pedestrian Monitoring, XDS electronic differential lock and Car2X (local communication with other vehicles and the traffic infrastructure). A multifunction steering wheel, single-zone automatic climate control (Climatronic), the Press & Drive comfort start system, a Bluetooth provision for mobile telephone, LED headlights, LED tail light clusters, LED daytime running lights, LED reading lights and two USB-C ports. This range of equipment is once again extended significantly for GTI, GTE and GTD. In many other details, as is the case with the exterior, the Golf GTI, GTE, GTD are also differentiated by the specific colours assigned to the respective drive system – red (GTI), blue (GTE) and silver (GTD). All pedals are made of stainless steel. 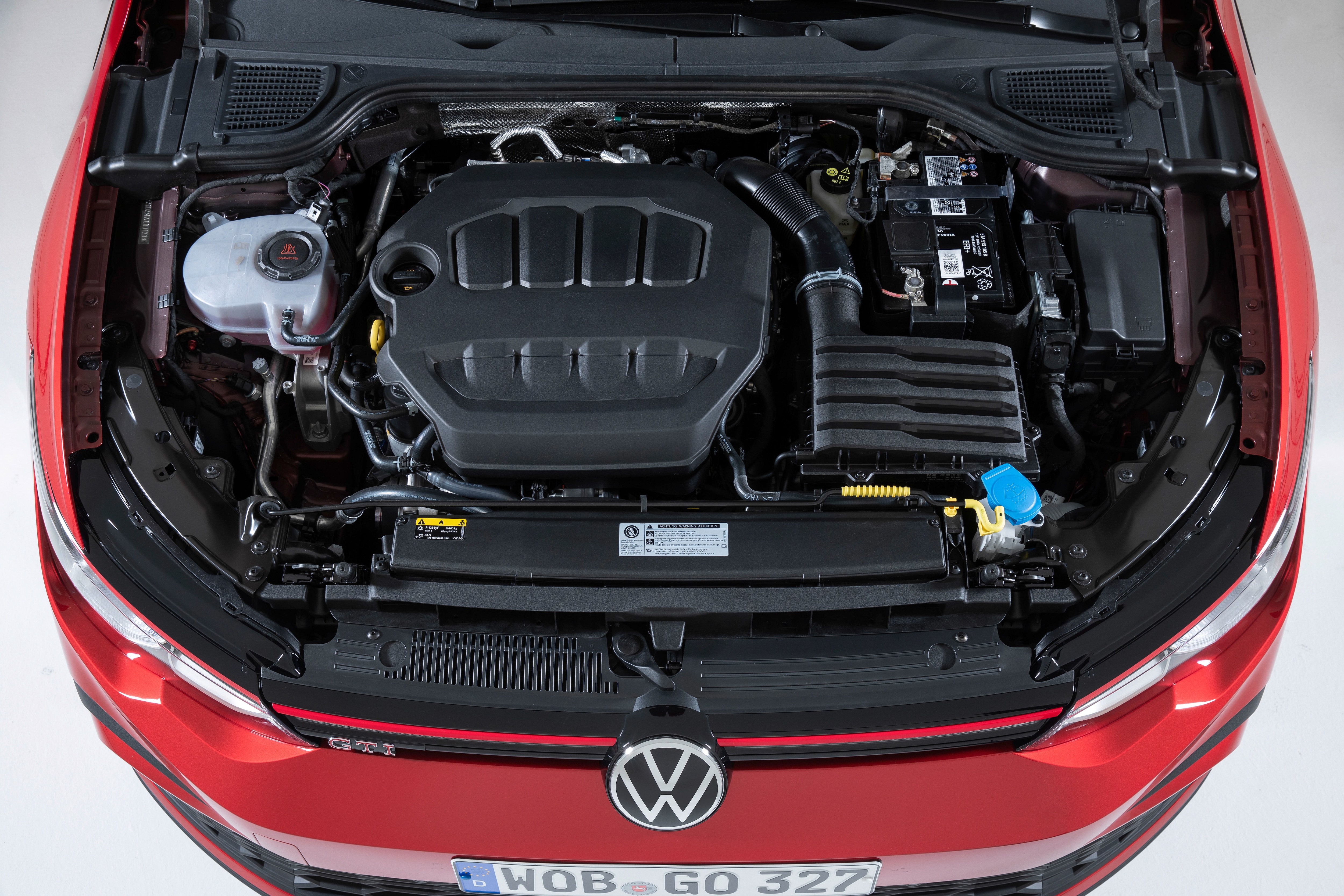 The new Golf GTI is powered by a 180 kW (245 PS) 2.0-litre turbocharged injection engine. The maximum torque is 370 Nm. The four-cylinder engine is coupled with a 6-speed manual gearbox as standard. A 7-speed dual-clutch gearbox is available as an option.

The plug-in hybrid drive of the Golf GTE essentially consists of a 1.4-litre turbocharged petrol engine with 110 kW (150 PS), the hybrid module with an electric motor (85 kW), a 6-speed DSG and a new lithium-ion battery. The powertrain delivers a maximum power output of 180 kW (245 PS) and a maximum system torque of 400 Nm. Compared with its predecessor, the all-electric range has increased significantly to now around 60 km as claimed by the company. It can be driven at speeds of up to 130 km/h in all-electric mode. When the battery is sufficiently charged, the Golf GTE always starts in all-electric E-MODE. The drive switches to Hybrid mode if the energy capacity of the battery drops below a certain level or if the speed rises above 130 km/h. In Hybrid mode, the driver has the option of maintaining the state of charge using three symbols on the Infotainment system screen (the equal sign “="), increasing it (up arrow “Ù") or reducing it to a defined level (down arrow “Ú"). This makes it possible to drive into an urban destination area under electric power and with zero emissions, even at the end of a longer journey, if so required.