A five-star safety rating is the highest a car can achieve in such crash tests done by the European safety agency.
By : HT Auto Desk
| Updated on: 18 Dec 2019, 05:47 PM 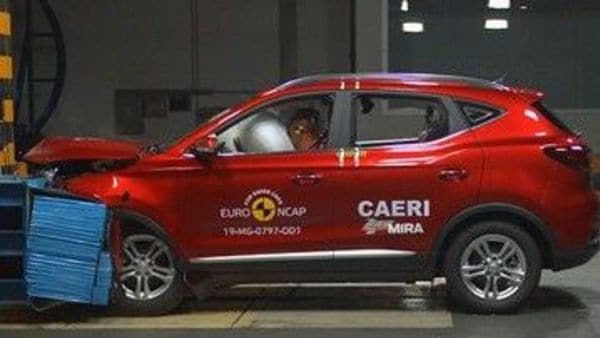 A five-star safety rating is the highest a car can achieve in such crash tests done by the European safety agency.

According to the test result, the passenger compartment of the ZS EV remained stable in the frontal offset test. Dummy readings indicated good protection of the knees and femurs of both the driver and passenger.

MG showed that a similar level of protection would be provided to occupants of different sizes and to those sitting in different positions. In the full-width rigid barrier test, protection of the driver was good for all critical parts of the body.

For the rear passenger, readings of chest compression indicated a weak level of protection but it was good or adequate for other parts of the body.

In the side barrier impact, all critical body areas were well protected and the ZS EV scored maximum points in this test.

In the more severe side pole test, protection of the chest was rated as weak, based on dummy readings of rib compression, while that of other body areas was good.

Tests on the front seats and head restraints demonstrated good protection against whiplash injuries in the event of a rear-end collision. A geometric assessment of the rear seats also indicated good whiplash protection.

The standard-fit autonomous emergency braking (AEB) system performed well in tests of its functionality at the low speeds, typical of city driving, at which many whiplash injuries occur, with collisions avoided or mitigated in all test scenarios.

MG Motor recently unveiled the India version of the all-electric SUV. It is slated to be launched in five Indian metros - Delhi, Mumbai, Chennai, Bengaluru and Hyderabad - early next year.