MG Motor teases upcoming EV, likely to be called MG 4, ahead of debut this year

MG Motor had earlier said that it will bring in a new affordable EV for the Indian customers. MG already offers ZS EV in India as its only electric offering.
By : HT Auto Desk
| Updated on: 24 Feb 2022, 07:29 AM 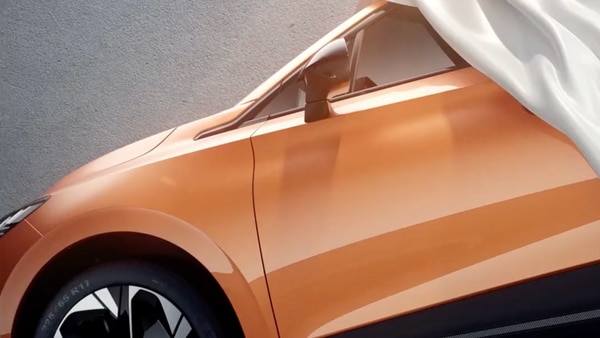 MG Motor has teased a new electric vehicle which will make its debut towards the end of the year. The British carmaker teased the model wrapped in covers, but shared some sneak peek into it through the teaser video.

The video shows the upcoming EV, which is likely to be called MG 4, in orange. It has black ORVMs, black plastic body claddings, 17-inch alloy wheels, bold shoulder lines, sharp-looking taillights and a black roof among some of its exterior features. The length of the MG 4 electric SUV will be 4,300 mm.

MG Motor shared the video with the note ‘A brand new 100% electric vehicle from MG has its UK premiere set in Q4 this year.’ However, according to the carmaker, this EV will be produced with the British customers in mind.

The teaser video of the electric SUV was posted on MG Motor's social media handle with the hashtag ‘MGElectricforAll’. It suggests that the carmaker is looking to come up with an affordable electric car. MG Motor had earlier said that it will also bring in a new affordable EV to the Indian markets this year. However, it is not clear, if MG Motor is planning to launch the same model in India too.

MG already offers ZS EV in India as its only electric offering. In December last year, Rajeev Chaba, President and MD at MG Motor India, had said, “In our endeavour to broaden access to wider customer segments, we will bring to the country the second EV, encouraged by the Government’s clarity on its EV roadmap."

A brand new 100% electric vehicle from MG has its UK premiere set in Q4 this year. The vehicle measures 4.300 mm in length and is developed with the UK consumer in mind. Take a sneak peek at this beauty and stay tuned..⚡ https://t.co/ImMlaNDVMf#MGElectricforAll pic.twitter.com/j3sHYN6oS1

According to reports, the MG 4 is likely to take on EVs like the Kia EV 6. The electric SUV is slightly larger in size compared to Volkswagen ID.3 electric car.

The MG 4 electric SUV is likely to come packed with a 61.1 kWh battery unit. The electric motor is expected to generate maximum output of 154 hp and 260 Nm of peak torque. Reports suggest, the unit should be enough to help the MG 4 to accelerate from zero to 100 kmph in a little over seven seconds. It is also expected to return a range of more than 400 kms on a single charge according to the WLTP cycle.