Marvel X SUV was showcased at the Auto Expo in Greater Noida back in February 2020. MG Motor plans to drive in the premium SUV, which is already available in global markets as Marvel R, to India later.
By : HT Auto Desk
| Updated on: 21 Dec 2021, 09:52 AM 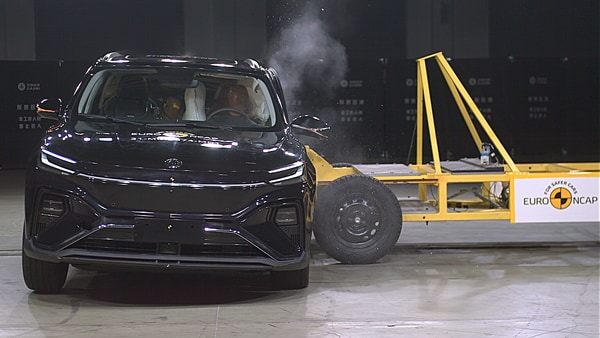 Electric SUV Marvel R, which is derived from MG Motor's Marvel X and is sold under the Roewe brand in China, has scored four star rating at the Euro NCAP crash tests.

During the tests at Euro NCAP, the Marvel R SUV’s passenger compartment remained stable in the frontal offset test. It showed good protection of the knees and femurs of both the driver and passenger. Structures in the dashboard were thought to present a risk of injury to occupant of different sizes and to those sitting in different positions, and protection of this body region was rated as marginal. Protection of the driver’s chest was also rated as marginal, based on readings of chest compression.

Marvel R has an advanced eCall system to alert the emergency services in the event of a collision, and a braking system which helps to prevent secondary impacts.

MG Marvel R is a mid-size electric SUV with a length of 4,674 mm. In China, this car has been sold since February 2021 under the Roewe brand, and it is exported to Europe with SAIC badging, a brand which owns both MG Motor and Roewe.

The five-seater electric car is equipped with three motors (one in front and two in the rear) with a combined output of 288 hp and 665 Nm of torque. The capacity of the battery is 70 kWh and it is capable of returning a range of a little more than 400 kms on single charge according to the WLTP cycle.

MG Motor had said that cars under the luxury Roewe brand can be rebadged as MG Motor and marketed in India. Rajeev Chaba, president and managing director of MG Motor India, had said all the products of SAIC Motor are available to the carmaker for launch in othemarkets.