The latest Mercedes-Benz S-Class had been launched for global markets in September of last year.Packed to the brim with features, the latest S-Class is also larger in dimensions than the model it will replace.
By : HT Auto Desk
| Updated on: 11 Jun 2021, 03:55 PM 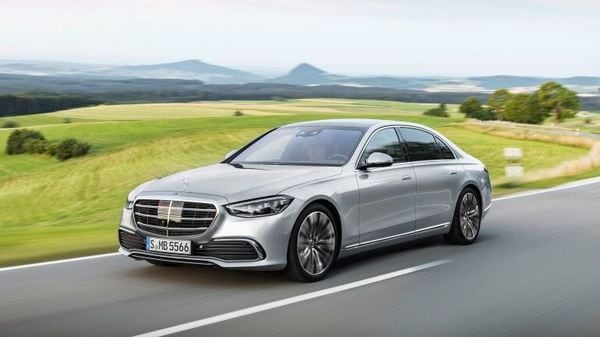 The latest S-Class from Mercedes

Mercedes-Benz India has confirmed it will launch the latest S-Class in the country on June 17. The S-Class sits at the top of the Mercedes' luxury sedan lineup and will be made available in both petrol and diesel engine options.

The latest Mercedes-Benz S-Class had been launched for global markets in September of last year and is touted as the most luxurious S-Class ever made by the German auto giant. It is loaded to the brim with technology and is also larger in dimensions than the outgoing model.

(Also Read: Luxury car market could recover quicker than others from pandemic woes in India)

The latest Mercedes S-Class offers a 12.8-inch tablet-style OLED infotainment screen and a 12.3-inch 3D digital instrument display for the driver. It now gets an active ambient lighting system, which employs 263 LEDs, a head-up display with augmented reality, and an Interior Assist function. There are two screens in the second row for the entertainment of the rear se occupants.

The latest S-Class also gets the new second-gen MBUX infotainment system. As per Mercedes, the car has received a completely remolded dash and fewer buttons and switches lending its cabin a minimalistic appeal.

The company claims that the new S-Class has a drag coefficient of 0.22cd, making it one of the most aerodynamically efficient passenger vehicles in the world today.

The long-wheelbase S-Class (India-bound) has grown by all parameters. It is now longer by 34 mm, wider by 22 mm, and taller by 12 mm. Moreover, its wheelbase has also been increased by 51 mm. Thanks to the increased size, the company has managed to free up 24 mm of legroom for the second-row passengers. With the new update, the overall boot capacity of the ultra-luxurious saloon has also increased by 20 litres to 550 litres.