The seven-seater Mercedes EQT will be the German carmaker's latest in the EQ series of electric cars.The Mercedes EQT is expected to be launched next year.
By : HT Auto Desk
| Updated on: 10 May 2021, 04:40 PM 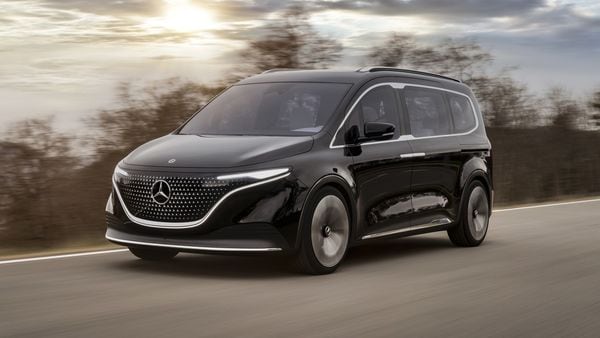 German carmaker Mercedes Benz has taken the covers off the EQT Concept electric van, its ninth model in the EQ line-up of vehicles. The electric MPV will be a seven-seater vehicle and will be based on the carmaker’s upcoming Citan commercial van later this year.

The Mercedes EQT Concept is expected to be launched next year. It is being jointly developed with Renault. Marcus Breitschwerdt, Head of Mercedes-Benz Vans, said, "We are expanding our portfolio with the T-Class. It will appeal to families and private customers who enjoy leisure activities and need a lot of space and maximum variability. And as the Concept EQT shows: we will also be offering a fully electric model in this segment in the future."

The Mercedes EQT Concept stands at 4945 millimeter in length, 1863 millimeter in width and 1826 millimeter high. The look of the electric MPV is characterised by the black panel front with LED headlights, the mirror-turned 21-inch alloy wheels, the panoramic roof and a light strip that connects the front and rear light clusters. The MPV also gets sliding doors on both sides to allow access to the third row of seats.

Inside, the seats are covered with white nappa leather, the plaited leather applications on the seat mirror are made of incorporated recycled leather. Above the instrument cluster there is a half-closed storage compartment for quick access to important utensils or documents. The ambient light on the center console, doors and in the footwell is supposed to create a stylish atmosphere. 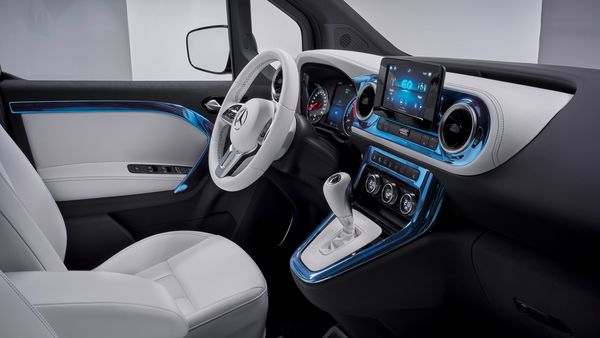 The interior of the EQT Concept is quite plush with premium seats, ambient lighting and many more features.

With the MBUX infotainment system, Mercedes is bringing its modern operating and display concept to the small vans segment. The system can be operated via the free-standing central display with touch function, controls on the steering wheel and optionally via the voice assistant "Hey Mercedes".

The steep rear with an upright tailgate and window allows for a spacious cargo space. The cargo space can be increased by folding down the seats in the third row. For the show car, Mercedes has also integrated an electric longboard in the cargo area.

The Mercedes EQT Concept is likely to get a 102 PS electric motor with a 44 kWh battery pack. It is claimed that the EQT can cover around 265 kilometers on single charge.

No further detail about the EQT Concept has been revealed yet. Mercedes is expected to bring the new T-Class onto the market in 2022.