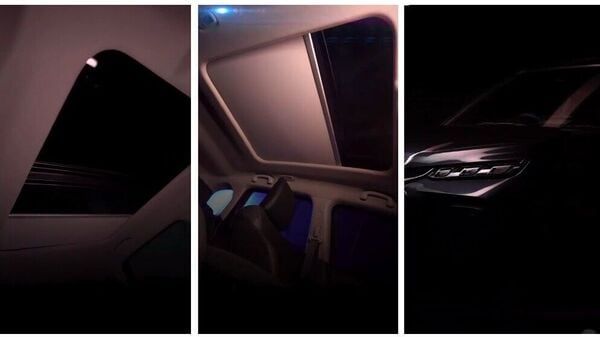 2022 Maruti Grand Vitara will be officially revealed on July 20th.

Maruti Suzuki is gearing up for the global reveal of its upcoming compact SUV in the country. The upcoming Maruti SUV will be called the Grand Vitara, as confirmed by the carmaker. While the company has previously teased several new features that it is bound to receive, it has now confirmed that Grand Vitara will receive a panoramic sunroof feature. For the record, the Toyota Urban Cruiser Hyryder was also introduced in India with a panoramic sunroof.

The company has previously teased the profile of the car along with the design of its LED headlamps and tail lamps. Sharing the underpinnings with Toyota's Urban Cruiser Hyryder, the Grand Vitara will come out to be redesigned, and rebadged version of the Hyryder. However, unlike seen in the case of previous products shared by Maruti Suzuki and Toyota, there will be several differentiators between both the SUVs. For starters, there will a new front grille on the Grand Vitara along with triple-element LED DRLs. Also, unlike the inverted C-shaped LED tail lamps found on the Hyryder, the Grand Vitara will be seen featuring a unique tri-element design on the rear fascia as well.

"In the entry-SUV segment, we have the Brezza which is a market leader (but) in the mid-SUV segment, we obviously need to strengthen ourselves. In the overall market, we have just two (SUV) models - Brezza and S-Cross, and there are 48 models in the industry (overall)," Shashank Srivastava, Senior Executive Director for Marketing and Sales at Maruti Suzuki India Limited (MSIL), told HT Auto previously. “If we need to achieve our market share, we need to strengthen the our SUV portfolio."