Maruti Suzuki is all set to drive in the facelift version of its flagship sub-compact SUV Brezza. The 2022 Maruti Brezza, which is likely to debut in the second half of June, will come with several changes and upgrades over the existing model.
By : HT Auto Desk
| Updated on: 30 May 2022, 01:19 PM 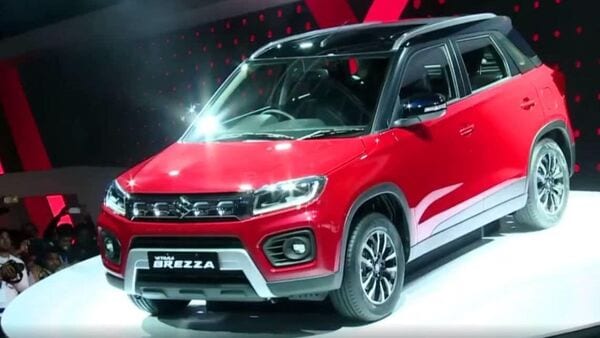 Maruti Suzuki Vitara Brezza received its last upgrade back in 2020 during the Auto Expo.

Maruti Suzuki Vitara Brezza is soon expected to arrive in a new avatar. India's largest carmaker is currently testing the new generation Vitara Brezza sub-compact SUV. It is expected to make its debut later in June. The Brezza facelift is another key launch from the brand this year after the Ertiga and XL6 facelift MPVS were introduced. However, in its new avatar, the Brezza is likely to get more changes and updates compared to the other key launches by Maruti Suzuki this year.

The 2022 Maruti Suzuki Vitara Brezza, which is likely to be renamed simply as Brezza, has already been spied undisguised with images shared widely across social media platforms. Based on the images, there are certain changes that are expected in the Brezza, which is being modified by the carmaker in an effort to focus more on the SUV segment in India.

One of the major changes in the new generation Brezza will be its design. While the overall look and feel of the SUV still resembles the existing models, there are several small tweaks that will make the SUV look sharper to make it more appealing. For instance, the grille of the new Brezza will be a lot sleeker than the current version. It has less chrome elements than seen on existing models. Complementing the new slim grille, the LED headlights have also been redesigned along with the LED DRLs. The profile of the Brezza will also undergo changes with redesigned alloy wheels and strong character lines to uplift its SUV looks. At the rear, the tailgate will also undergo changes along with a new bumper and LED taillights. The Brezza may also get a sunroof for the first time.

The interior of the new Brezza will also undergo several changes. These include a new-look dashboard, a new 9-inch infotainment screen and instrument cluster possibly sourced from the latest XL6 and Baleno. Among other features, the Brezza is likely to get 360 degree camera, ventilated seats, automatic climate control, HUD display, wireless charging, ambient lighting and six airbags along with Suzuki's connected car technology to make it a more attractive option than the current version.

Maruti offers Vitara Brezza with the K15B series 1.5-litre petrol engine mated to 5-speed manual and 4-speed automatic transmission. Under the hood, the new Brezza is almost certain to come with the new K15C series 1.5-litre petrol unit which also powers the new Ertiga, XL6 MPVs. The transmission units is also going to receive changes with the introduction of the new 6-speed torque converter along with paddle shifters. The new petrol engine is expected to improve mileage of the new Brezza, though the power output will remain largely similar to the existing model.