Mahindra e-KUV100 will be available in the next three months 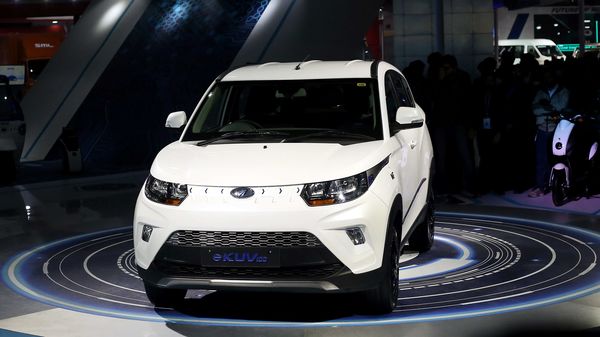 Mahindra e-KUV100, at Mahindra 's stall during the Auto Expo 2020 in Greater Noida.

Mahindra and Mahindra is all set to roll out the first batch of its upcoming electric SUV e-KUV100 in the next few months. Speaking at the launch of Mahindra's electric three-wheeler Treo Zor, the carmaker's MD and CEO Pawan Goenka confirmed that work is on to start delivering e-KUV100 to dealers, and is likely to be available for customers in the next three months.

The Mahindra e-KUV100 is the company’s first in-house all-electric car. The SUV has been equipped with a liquid cooled battery pack that supports fast charging of up to 80% in 55 minutes, auto transmission, fast charge and remote connections.

Design-wise, the electric version of the KUV100 SUV is not too different from its ICE version. The biggest difference is the blue highlights on the exterior and the seats inside to recognise the SUV as an electric vehicle instantly.

Feature-wise though, the electric variant of KUV100 will be richer. It will have remote door lock and unlock, cabin precooling option, location tracking, remote diagnostics, driving pattern monitor, 7-inch touchscreen infotainment system, steering-mounted audio controls and standard dual airbags among many others.

The Delhi government's incentive of ₹1.50 lakh to buy an electric car will pull back the e-KUV100 price to less than ₹7 lakh. This scheme, however, is restricted to the first thousand electric vehicles bought after the announcement was made. Those who will miss out can take benefit through waived-off road tax and registration fees for electric vehicles as part of this policy.