The Renault Triber MPV fared satisfactorily as far as protection offered to adult occupant driver and passenger is concerned.Renault Triber did not do as well in child safety test where it showed hints of major injuries in case of an impact.Triber from Renault starts at ₹5.30 lakh (ex showroom).
By : HT Auto Desk
| Updated on: 16 Jun 2021, 01:54 PM 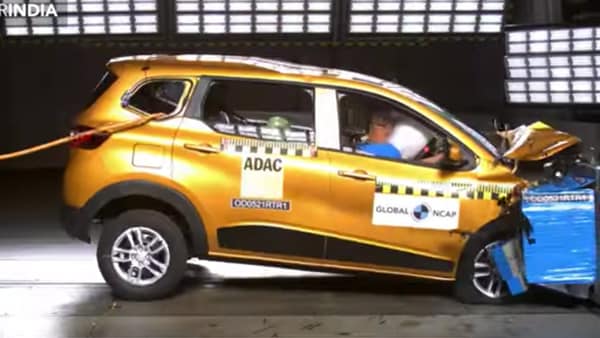 Renault Triber has emerged as one of the safest cars in India after it scored four stars in Global NCAP crash tests.

Renault's flagship MPV Triber has emerged as one of the safest cars in India as it passed the Global NCAP crash tests comfortably. The Triber MPV scored an impressive four-star rating at the latest tests held under Global NCAP's #SaferCarsForIndia campaign.

The Renault Triber that was put to test had most basic safety specifications with just two airbags. According to the global vehicle safety watchdog, the Triber MPV 'showed significant improvements from previous Renault models' tested by Global NCAP.

Alejandro Furas, Secretary General of Global NCAP, said, "Renault has significantly improved adult occupant protection performance in frontal crashes compared with our 2016 tests on the Kwid. The Triber sets a strong baseline for the manufacturer, and we encourage Renault to maintain this important progress as a minimum with the goal of achieving 5 star levels of safety."

Venkatram Mamillapalle, CEO & Managing Director at Renault India Operations, said, "Safety is of paramount importance for Renault and our products meet and exceed the requisite safety standards set by Indian Regulatory Authorities. An outcome of a joint project between Renault teams in India and France, Renault Triber has already established itself as a successful product and has seen tremendous acceptance amongst a wide set of car buyers. This is a proud moment for Renault in India, as Triber was conceived, developed and produced in India, for Indian customers first, before we took it to the world. The 4-star adult safety rating by Global NCAP for Triber reiterates our commitment towards safety."

"This latest 4-Star adult rating reaffirms that Renault stands by its commitment to make the best in global car safety, accessible to Indian customers. As a customer-focused company, Renault is already future-ready in terms of technology, design and engineering for enhanced safety for our vehicles and Triber is a testimony to this," he added. Renualt Triber is an affordable three-row options for those on a budget.

Renault Triber did not do as well when it came to child safety parameters. The agency concluded that the child seat, which is installed with adult seatbelts, was not able to prevent excessive forward movement during the impact. The results showed that the head of the child occupant is low as it would be exposed during a crash.

Renault recently launched the 2021 version of the Triber MPV in India at ₹5.30 lakh. The Renault Triber MPV is available in four variants, which include the RXE, RXL, RXT and RXZ spec models. Though there have been several cosmetic changes and tech updates in the new Triber, the safety features remained largely similar to the previous editions.