Lexus supercar in shiny chrome on sale for over $1 million 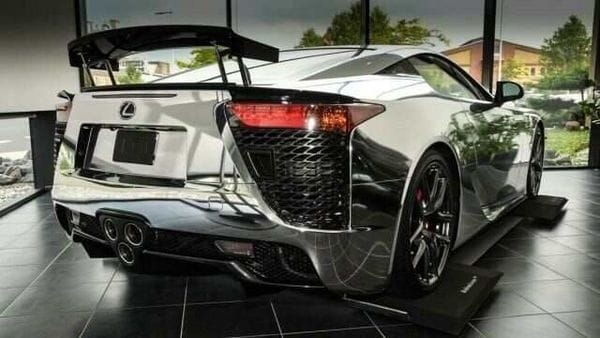 This photo was tweeted by @LexusiaNews

In the list of most exclusive and most admired Lexus cars, the LFA supercar holds a very special place with only a couple of hundred units ever made. Little wonder then that when one goes on sale, it attracts a whole lot of attention. One particular unit in Germany, decked in chrome, is even more exclusive than its siblings and may fetch over a million US dollars.

Motor1 reported that the chromed Lexus LFA supercar has done around 870 kilometers and has now been put out for a new owner. While the asking price is approximately $954,000, an additional VAT will take the final price to well over a million US dollars. It is noted in the report that while there are a few LFA supercars available on sale in the world, none probably has done as few kilometers as this chromed unit.

Lexus had sold three new LFA units in 2019 and in its original form, it packs a 553-horsepower 4.8-liter V10 engine under the hood which makes it quite a capable machine on the roads. If style and not power is what someone is looking for, the LFA has a lot of it as well. Little wonder then that even Paris Hilton bought herself this car for her 30th birthday. Recently, the car owned by the celebrity was also put up on sale with an asking price of around $400,000.

As for the chromed LFA in Germany, its massive asking price may largely be due to the post-sale work on its exterior body which lends a rare car an even more exclusive appeal even if it is not clear if it violates road rules considering it would reflect sunlight onto cars coming in from the opposite direction - a safety hazard. Also, this LFA suffers from the same woe that many of its siblings have in the past - why pay so much for a Lexus when the same amount will get a Ferrari or Porsche, the more iconic symobols of automotive luxury and power.