The Sonet will be the third product from Kia India, following the Seltos SUV and Carnival MPV.
By : Prashant Singh
| Updated on: 23 Jul 2020, 04:38 PM 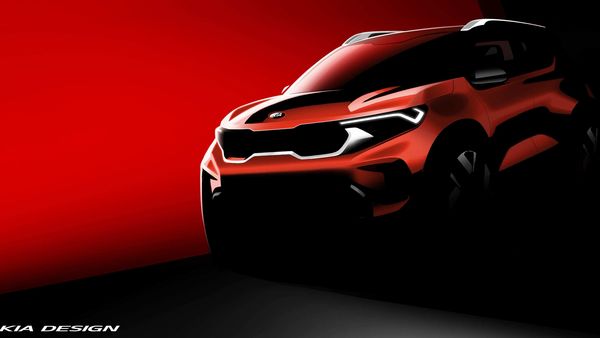 Kia is gearing up to launch the Maruti Vitara Brezza rivaling Sonet subcompact SUV in the Indian market in August. The SUV has been teased in an official design sketch revealed on Thursday.

The Sonet was officially showcased as a near-production concept at the Auto Expo 2020. And the latest rendered image draws heavily from version displayed at the Expo. The Sonet will feature a bold and dynamic design underlined with Kia's signature-style elements such as front tiger-nose grille and a three-dimensional 'step-well' geometric grille mesh.

“With the new Kia Sonet, we had the ambition to give this compact SUV a strong and muscular character found only in much larger vehicles. With this in mind, we have designed what we believe is a great SUV with a uniquely sporty attitude, a confident stance and a dynamic silhouette. We also gave the new Kia Sonet an uncompromising attention to detail and a selection of colors and materials that could have only be inspired by the great cultural heritage that our designers found all over India," said Karim Habib, Senior Vice President and Head of Kia Design Center at Kia Motors Corporation.

The company promises that the Sonet will benefit from an excellent build quality, class-leading features, connectivity innovations, choice of powertrains, and comprehensive safety equipment.

Habib added, “As a whole we believe the new Kia Sonet will be a fantastic SUV with a very compelling and attaching character to our young and young at heart, always connected customers in India and beyond…"

The Kia Sonet is going to be launched on August 7. It is expected to be priced in the range of ₹7.5 lakh to ₹10 lakh (ex-showroom). Its rival list will include the Maruti Vitara Brezza, Hyundai Venue, and Tata Nexon.

Sonet will be the second ‘Made in India’ product from Kia, following the Seltos SUV. It will also be the company's third product here, after Carnival.