Kia Sonet is one of the most popular sub-compact SUVs in the Indian markets.At under four meteres, Sonet fits well into Indian road and traffic conditions.
By : HT Auto Desk
| Updated on: 06 Apr 2021, 03:18 PM 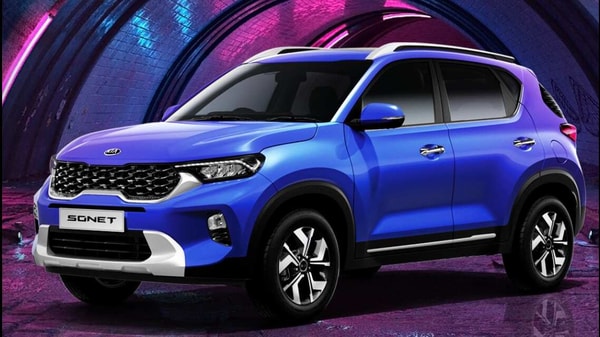 Kia Sonet is all set to get a bit bigger for the Indonesian market as a 7-seater version is all set for debut on April 8.

Kia Sonet SUV's popularity has spread beyond the boundaries of India to other countries, and has been the Korean carmaker's newest offering in some of the SouthAsian countries too. However, countries like Indonesia, where people prefer a car with larger capacity than what Sonet offers in terms of space, Kia is planning to change its strategy with a family-car version of the Sonet SUV.

Reportedly, the carmaker is all set to come up with a seven-seater variant of the Sonet SUV for the Indonesian market on April 8. Kia has been teasing the new Sonet for some time and has shared silhouetted images of the SUV on its social media platforms.

The teaser image goes with a countdown text hinting an April 8 debut with a message that says, "Are you ready for something Extra 2.0? Stay tuned for the KIA Indonesia timeline so you don't miss the updates."

It is difficult to figure out from the images whether the Sonet has grown in size to fit in a third row comfortably. However, according to sources, the seven-seater version of the Sonet SUV will have the same dimensions as the five-seater model that is available in India as well. If this is true, then the leg room for passengers in the third row is likely to be too small for a pair of adults.

In Indonesia, the dimensions of the Kia Sonet SUV is slightly bigger than the model that is currently on offer in Indian market. The Indonesia-spec Sonet SUV stands 4,120 mm in length. As far as technical specifications and features are concerned, this new model is likely to feature the same as available in the regular Sonet SUV.

What comes as a surprise is that Kia decided to pick Sonet SUV to go for a third-row SUV instead of its more popular Seltos SUV, which has more space on offer. Kia's Korean sibling rival Hyundai is also set to unveil Alcazar SUV, the seven-seater version of its immensely popular Creta SUV, in a couple of days.

There are no more details about the new model of the Sonet SUV. Things will be clearer once Kia takes the covers off the vehicle later this week. It is likely that Kia will offer the SUV in other Asian markets as well. However, it seems unlikely that this new model will hit the Indian shores any time soon.