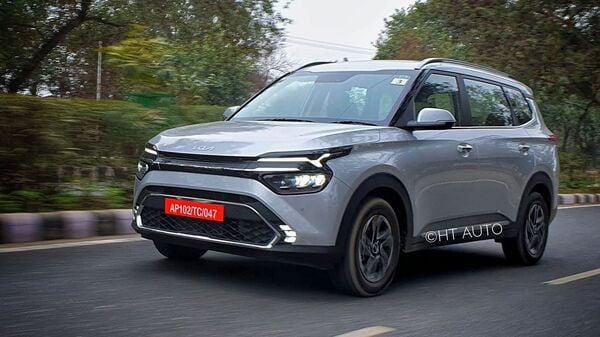 Carens by Kia India will take the fight against the rivals such as the Hyundai Alcazar and the Tata Safari.

Kia Carens will go on sale in the Indian market on February 15th, the company announced on Saturday. The three-row MPV made its official debut back in December 2021 and the company opened the order books for the new car in January. The car has also started arriving at the company dealerships ahead of the official launch.

In January, Kia India commenced the production of the new Carens at the Anantapur manufacturing facility in Andhra Pradesh. The upcoming three-row MPV or Recreational Vehicle (RV) will take on the fight with the rivals such as Hyundai Alcazar and Tata Safari.

Carens MPV will be launched in India with multiple powertrain and gearbox options. Under the hood, the car will pack a range of options including 1.5-litre naturally-aspirated petrol engine, 1.4-litre turbo petrol engine, and 1.5-litre diesel engine. For transmission, there will be an option of a six-speed manual, seven-speed DCT, or a six-speed automatic gearbox.

The key cabin features of Carens MPV will include LED headlamps, a fully-digital instrument cluster, and a 10.25-inch touchscreen infotainment system. In addition, it will also be equipped with an electric sunroof, a one-touch electric tumble function for the second-row seats, a wireless charger, an air purifier, as well as roof-mounted aircon vents. For safety, the Carens MPV will use some industry-standard features such as a tyre pressure monitoring system, downhill brake control, six airbags, ABS, ESC, rear parking sensors, and disc brakes on all four wheels.