Seltos and Sonet are the two flagship SUVs from the Korean carmaker in India. Kia India has been exporting these two SUVs to more than 90 countries since its India debut 29 months ago.
By : HT Auto Desk
| Updated on: 03 Feb 2022, 11:22 AM 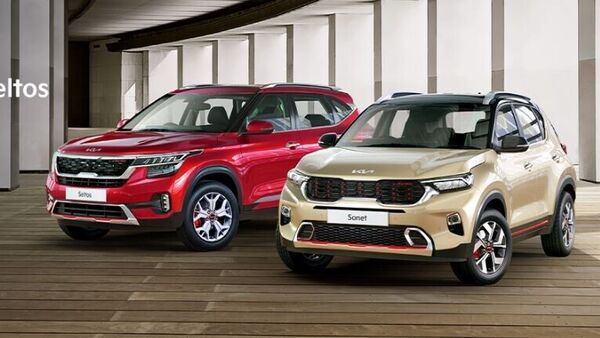 Kia India has exported more than one lakh units of Seltos and Sonet SUVs across the world in just 29 months of the Korean carmaker's India debut.

Kia India has exported more than one lakh units of Seltos and Sonet SUVs across the world in just 29 months of the Korean carmaker's India debut. The carmaker has announced today that it has reached the milestone by exporting the two SUVs to more than 90 countries.

Kia India issued a statement today saying the Korean carmaker has registered 1 lakh vehicles in exports since it started shipping Seltos in September 2019. It said that the carmaker has exported a total of 1,01,734 vehicles since its India debut up till January this year. The 91 countries where Seltos and Sonet SUVs were exported during this period were in the regions of Middle East, Africa, Central & South America, Mexico, and Asia-Pacific.

Seltos SUV appears to be a more popular product globally than the sub-compact Sonet SUV. Kia said the share of exports of Seltos and Sonet stands at 77 percent and 23 percent respectively.

In 2021, Kia India exported 46,261 units of Seltos and Sonet, registering a 23percent growth year-on-year in exports. Kia said it also became the number one utility vehicle exporter in the country, with a market share of over 25 percent. It also ranks third in the overall passenger vehicle segment with a market share of close to 9 percent.

Tae-Jin- Park, MD & CEO at Kia India said, "India is a strategic geography for Kia Corporation, not only in terms of sales but also in terms of developing India as a manufacturing and export hub. To meet the world's growing demand for SUVs, our hi-tech Anantapur plant has become one of the most critical production hubs for compact and medium-sized SUVs. We are extremely pleased that our India-centric models, Seltos and Sonet, have performed admirably in international market; highlighting the fact that our Indian products are truly global in nature. We are now excited to continue building on this positive momentum with India manufacturing facility being the mother plant for Carens, serving the world."

Kia is all set to drive in its fourth product to India in the form of a three-row RV Carens. The launch of the six- and seven-seater vehicle will take place later this month.