Hyundai Ioniq 5 facelift will be introduced later this year in global markets. However, it is not clear whether the same updates will be available for the model to be launched in India.
By : HT Auto Desk
| Updated on: 10 May 2022, 12:45 PM 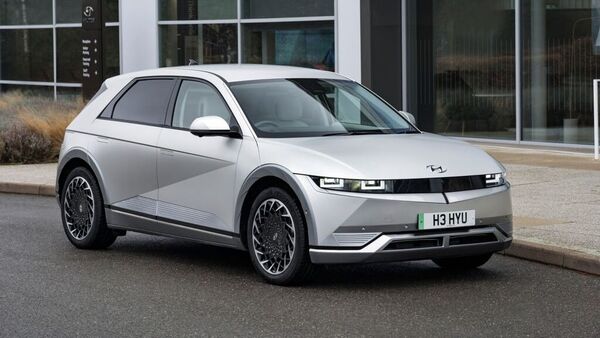 Hyundai Ioniq 5 EV is all set to get fresh updates with a new battery and enhanced range of more than 500 kms.

Hyundai is all set to upgrade its India-bound electric SUV Ioniq 5 for the global markets. The Ioniq 5, which was adjudged as the World Car Of The Year in 2022, will be launched in India in the second half of this year. However, ahead of the launch, Hyundai is likely to introduce a facelift version of the Ioniq 5 in markets abroad with a new battery and enhanced range. The Hyundai Ioniq 5 is expected to hit the markets next year. It rivals the likes of Kia EV6, which is set to launch in India soon.

Hyundai says that the updated Ioniq 5 will come with a new 77.4kWh battery, along with several range enhancements and new features, which include a video-based digital side mirrors. Mounted in the Ioniq 5’s rear spoiler, the Digital Centre Mirror offers panoramic rear view from the car.

Hyundai will also introduce a new edition of Ioniq 5 called Namsan Edition. It will be the new top-of-the-range model with improved powertrain specifications. The Namsan Edition is named after Namsan Mountain in Seoul, capital of South Korea. The premium versions of the Ioniq 5 will also receive upgrades like leather upholstery, soft touch interior, 64 colour ambient lighting and sliding centre console.

The Hyundai Ioniq 5 models will be available with both the old 58 kWh battery pack and the new 77.4 kWh lithium-ion battery that delivers an increased range of up to 507 kms on a single charge according to the WLTP cycle. The power output will also increase by about 11 hp to 320 hp over the previous 72.6 kWh battery pack. The previous generation Ioniq 5 came with a claimed range between 451 kms and 430 kms on a single charge.

Hyundai Ioniq 5 is the first model based on the Korean carmaker's first dedicated BEV platform called E-GMP (Electric Global Modular Platform). The Ioniq 5 was first launched back in February 2021. It is currently available in global markets in both 2WD and AWD variants. The 2WD model gets a rear axle-mounted electric motor that churns out 217 hp of power and 350 Nm of torque. The AWD variant on the other hand gets two electric motors each powering one axle. It generates 305 hp of power and 605 Nm of torque.

Hyundai had earlier announced that it will launch the Ioniq 5 EV in India in 2022. This comes as part of the automaker's strategy for expanding its battery electric vehicle portfolio in the country. The Ioniq 5 could be Hyundai's second electric car in India, after the Kona EV, which is already in business.