Hyundai Venue has been a dominant player in the sub-compact SUV segment and while newer rivals have attempted to mount a challenge, Venue has held its ground.
By : Shubhodeep Chakravarty
| Updated on: 26 May 2022, 01:43 PM 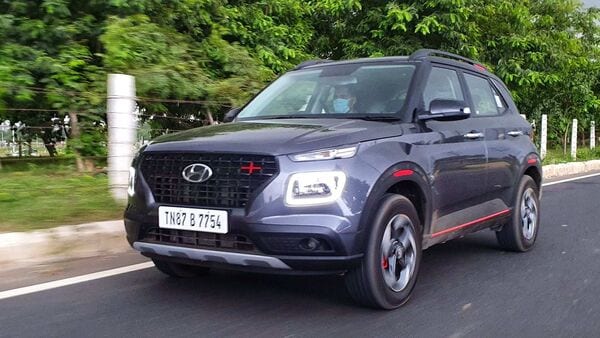 Hyundai Venue is offered with both diesel and petrol engine options, and comes with multiple transmission choices including a semi-automatic unit.

Hyundai Motor India on Thursday informed that it has sold over three lakh inits of its Venue which was first launched in the market in 2019. The Hyundai Venue sub-compact SUV has been a prolific performer for the company which has increased its focus on SUVs across segments and price points in recent times, and also sells the extremely popular Creta model here. With the launch of the updated Venue scheduled for next month, the Venue could well add to its impressive sales numbers going forward.

Hyundai Venue has compact proportions which has made it popular among buyers who primarily drive within city limits on a daily basis. At a time when some rivals have opted for a petrol-only strategy, Hyundai has continued to bet big on choice and Venue is yet another model from the Koreans to get both petrol as well as diesel engine choices.

At launch, Venue was offered in four trims - E, S, SX and SX(O), and in 13 broad variants. It also came - and comes - with six-speed manual gearbox and a seven-speed double clutch transmission (DCT) option. Subsequently, a semi-automatic transmission option or iMT was also added.

But while engine and transmission choices have contributed to the success of Hyundai Venue in the country, it is also a car that is rich in terms of features in the cabin. The Venue is equipped with an eight-inch touchscreen infotainment system with support for Apple CarPlay and Android Auto, rear AC vents, air purification system, sunroof, among others.

Little wonder then that the Venue hit the one lakh milestone by June of 2020, or a little over a year since launch. Since, and despite a multitude of challenges plaguing the Indian and global automotive industry, this Hyundai product has continued to be a champion player. Hyundai