Hyundai Motor had unveiled the 2022 facelift version of the Tucson SUV in India last month. In its new generation, the Tucson facelift comes with several upgrades in design and technology, which also include ADAS features.
By : HT Auto Desk
| Updated on: 03 Aug 2022, 09:46 AM 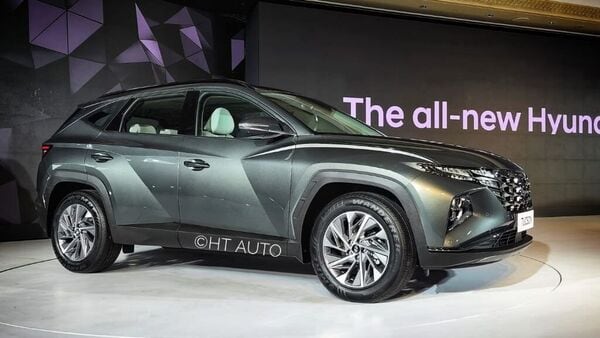 The 2022 Hyundai Tucson will sport Level-2 ADAS feature. It will have 19 Hyundai Hyundai SmartSense ADAS features.

Hyundai Motor is all set to launch the 2022 Tucson facelift SUV in India on August 10. The Korean carmaker will officially announce the price of the SUV, which will rival the likes of Citroen C5 Aircross among others in the premium SUV segment. Bookings have already started for Hyundai Tucson at an amount of ₹50,000. 2022 Hyundai Tucson will be offered in two variants, called Platinum and Signature. It is available with both petrol and diesel engines.

The new generation Hyundai Tucson has been updated with new looks. Staying true to Hyundai's Sensous Sportiness design philosophy, the SUV now gets a large grille with LED head light units. The grille with dark chrome patterns match the LED light setup as is seen across new generation models from the Korean carmaker across the world. From the sides, the Tucson facelift SUV has added more muscle with prominent character lines. It appears sportier than before also thanks to large wheel arches. At the rear, the SUV gets updated LED tail lights which are connected with an LED light strip in the middle.

The cabin of the new Tucson as much updated as the exterior. It now features an all-digital 10.1-inch driver display and another 10.1-inch main infotainment touchscreen unit. Other feature highlights include a wireless phone charging, ambient lighting, ventilated front seats, 360-degree camera, keyless entry and auto-dimming IRVM, among others.

On the technical side, the Tucson will be the first Hyundai SUV to offer Level 2 of Advanced Driving Assistance Systems (ADAS) features in India. It will offer automated sensing technology, camera and radar sensors to detect a car, a pedestrian, or a cyclist on the road. Additionally, it will feature 29 first-in-segment features.

Expect the price of the new Tucson to start from north of ₹25 lakh. The price for the Tucson with diesel engine may hit the ₹30 lakh bracket.