Hyundai said the defects in the Kona electric SUVs will be checked and rectified free of cost for the owners.
By : HT Auto Desk
| Updated on: 02 Dec 2020, 09:26 AM 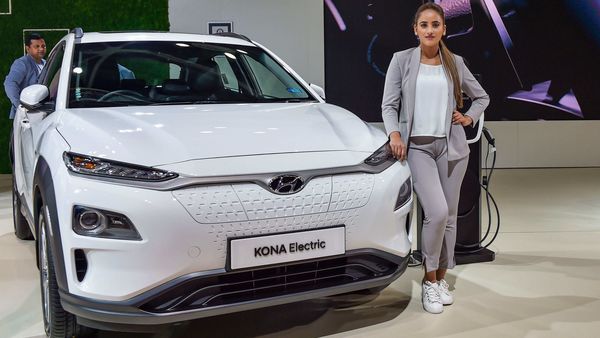 A model poses next to a Hyundai Kona Electric car displayed at the Auto Expo 2020 in Greater Noida. (File photo)

Hyundai Motor has decided to voluntarily recall 456 units of its electric SUV Kona which may have potential electrical deficiencies in the battery system. Hyundai made the announcement, saying that the carmaker has initiated the Kona recall to inspect the problem with its high-voltage battery system in the electric SUV manufactured between April 1, 2019 and October 31, 2020.

Hyundai has assured all the defective units of Kona electric SUV will be checked and rectified at no cost to customers. Hyundai also said the Kona owners will be notified in a phased manner to bring their vehicle for inspection at all authorised Hyundai Electric vehicle dealers.

Earlier, the company had initiated another recall of Kona electric SUVs in Korea, starting October 16. The recall, which included software updates and battery replacements after inspections, involved 25,564 Kona electric SUVs built between September 2017 and March 2020.

The safety recall was 'a proactive response to a suspected defective production of high-voltage batteries used in the vehicles, which may have contributed to the reported fires'. Hyundai said that it will deploy all necessary measures to identify the cause of the fire and address customers' needs.

Some 13 incidents of fire involving the Kona EV, including one each in Canada and Austria, have been documented, the office of ruling party lawmaker Jang Kyung-tae said in a statement.

Kona EVs use batteries made by LG Chem Ltd.

LG Chem said the exact cause of the fire had not been determined and a reenactment experiment conducted jointly with Hyundai had not led to a fire, so the fires could not be attributed to faulty battery cells.

It would actively participate in future investigation with Hyundai to find the cause, LG Chem added in a statement.