Hyundai Aura launch today, will take on Maruti's Dzire and Amaze from Honda

Hyundai has packed Aura with premium features and the car gets contemporary styling elements and three engine options.
By : HT Auto Desk
| Written By : Shubhodeep Chakravarty
| Updated on: 21 Jan 2020, 09:07 AM 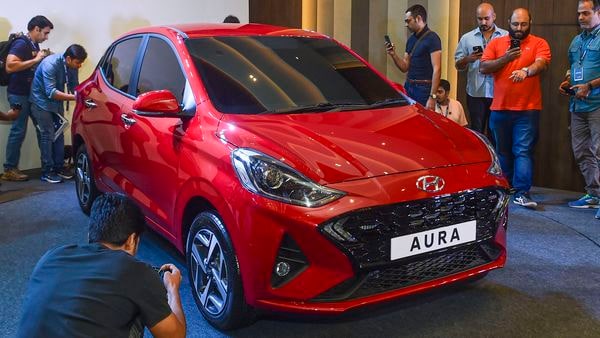 NEW DELHI : Hyundai is set to once again storm the entry-level sedan segment in the country with the launch of Aura today (Tuesday, January 21). The Aura has been positioned as a premium offering and while it is a successor to the Xcent, it will not replace it with the latter being targeted towards fleet services.

While the Aura won't eat into Xcent's share, it has the potential to take the fight to Maruti Suzuki's enormously successful Dzire and the Honda Amaze which too has sold by the dozens. Hyundai is betting on a number of factors to work in favour of Aura in a pitched battle in the sub-four-meter sedan category.

The Aura, for starters, gets a new design language which has been inspired from the Grand i10 NIOS. With an emphasis on 'Sensuous Sportiness', the Aura gets twin boomerang DRLs with a satin front grille, projector head lights and fog lamps. A coupe-like design philosophy is amply clear from the side and the Aura sits on R15 diamond-cut alloy wheels under imposing wheel arches. On the rear, the car has been given a deliberate wide-stand appeal and features LED tail lamps, chrome strip and glossy black wrap around.

Hyundai has once again brought in a long list of features and the Aura gets an 8.0 inch infotainment system with smartphone connectivity with Arkamys Premium Sound, 5.3-inch digital speedometer and MID, wireless charging, air curtain, eco coating and Driving Rear View Monitor for rear view display on screen while driving forward.