Earlier this year, Hyundai had announced the arrival of the seven-seater SUV which will take on the likes of Tata Safari and MG Hector Plus.
By : HT Auto Desk
| Updated on: 16 Mar 2021, 08:06 AM 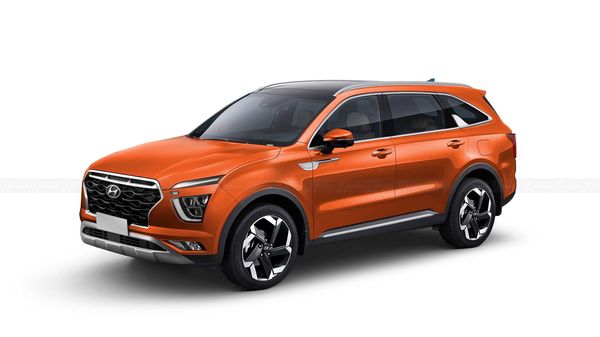 Hyundai Motor is all set to take the covers off its new 7-seater SUV for the Indian market soon. According to reports, the global debut of the Creta-inspired SUV will take place on April 6. The Alcazar SUV has already been listed on the official website of the Korean carmaker as an 'upcoming' model. The pre-bookings of the 2021 Hyundai Alcazar SUV is expected to start by mid-April.

This 7-seater SUV from the Korean carmaker was being worked upon for quite some time now. For most part of it, it was believed to be a longer version of Hyundai's most popular SUV in India - the Creta SUV. Last month, Hyundai had announced that the SUV will be called by the name Alcazar.

The reason why it is believed to be a 7-seater version of the Creta SUV is its design. Leaked images, renders etc all point to the same design philosophy seen in the new generation Creta SUVs. Besides being bigger and longer in size, the Alcazar is expected to be far more premium than Creta SUV.

As of now, not many details about the car's looks, features or technical specifications have been revealed. However, it is believed that the Alcazar SUV will have high mounted LED DRLs, and split front headlamps like one would find on a Creta SUV. The grille is likely to be tweaked slightly to make it look more premium and appealing and the bumpers are likely to be sportier to contribute to a slightly distinctive look. The Alcazar is also expected to have an extended overhang at the sides. At the rear, expect a redesigned tailgate with wider split-LED taillights and bumper.

The 2021 Hyundai Alcazar SUV also promises to offer ample space inside the car. The name itself, derived from from Arabic al-qasr or Latin word Castrum, which stands for palace or fortress. While promoting the SUV, Hyundai had stressed on words like 'grand life' and 'power', showcased a castle and said it draws inspiration from the royal lineage of castles and palaces.

The 2021 Hyundai Alcazar SUV is expected to get a price tag between ₹14 lakh to ₹20 lakh (ex-showroom). Alcazar will probably sit somewhere between Hyundai's Creta and Tucson SUV as far as pricing is concerned. When launched, the Alcazar SUV will go up against rivals like Tata Safari and MG Hector Plus.