Ford Explorer, which is the US-based carmaker's best-selling SUV in China, has made its debut with several changes on the inside as well as the outside.
By : HT Auto Desk
| Updated on: 05 Aug 2022, 12:34 PM 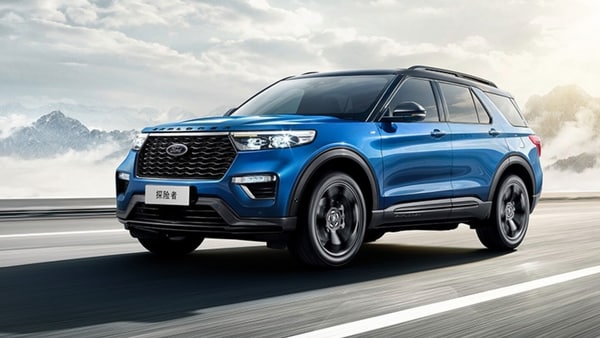 The new Ford Explorer SUV has grown in size compared to its predecessor.

Ford Motor has officially unveiled the Explorer facelift SUV for China. The Explorer, which has been the all-time best-selling SUV in United States for a long time, has been updated with new looks and technical upgrades on the inside. The biggest highlight of the new Explorer is its massive 4K-resolution infotainment screen. Since the first generation of the SUV was launched 10 years ago, China has become the largest market for the Explorer SUV outside of North America.

In terms of design, the SUV debuts new LED headlights at the front, along with a large grille and a front bumper that makes it look longer. The SUV has grown in size and now measures 5,063 mm compared to 5,050 mm in the previous model. The bumper has chrome accents and slimmer air intakes. Under the bumper there is a silver skid plate and double exhaust outlets finished in chrome at the rear.

Inside, passengers will find a new dashboard. At its centre is a 4K-resolution 27-inch touchscreen infotainment display available as standard. The Infotainment system is now controlled from the new and longer wide touchscreen that covers much of the dashboard and gives the front passenger more control to adjust the multimedia system. The look and feel of the cabin is more premium with slimmer air vents, new rotary dials on the centre console, a multifunctional steering wheel with by a 12.3-inch instrument cluster and head-up display. There is also B&O audio system, 3-zone climate control among other features. 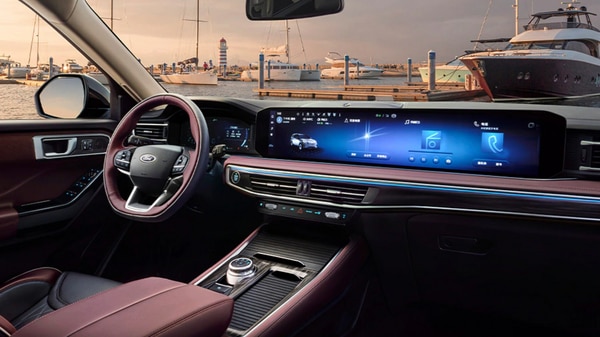 The highlight of the cabin of Ford Explorer facelift SUV is a large 4K 27-inch touchscreen unit which dominates the dashboard.

Simon Brook, Chief Designer of Ford China Design Center, said, “Being the first time the Explorer was designed outside of North America, it was important that it continues its successful heritage of pioneering innovation and adventure whilst being modernized for the progressive China market." Brook elaborated further on differences when it comes to design. He said, “We know our Chinese customers value a high degree of sophistication, luxury and premium refinement, from exterior to interior.

In China, the Ford Explorer facelift will come with a 2.3-litre EcoBoost engine that can generate 276 horsepower and 425 Nm of peak torque. The engine is mated to a 10-speed automatic transmission that delivers power to the rear axle. A variant with an all-wheel drive system is also available.