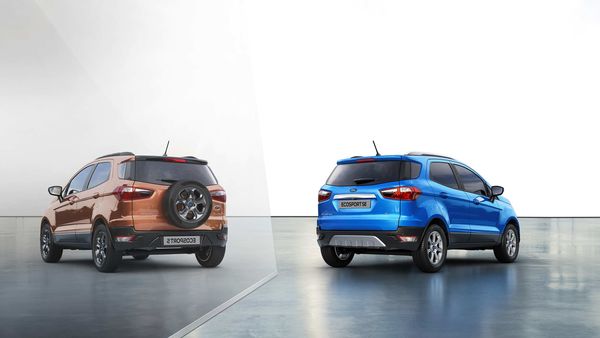 Ford EcoSport is sold in several global markets minus the rear-mounted spare wheel.

Ford India on Wednesday drove in the EcoSport SE at ₹10.49 lakh for the petrol version and ₹10.99 lakh for the diesel (ex showroom prices) in the Indian car market. The Ford EcoSport SE comes without the rear-mounted spare wheel and instead, gets a puncture repair kit which allows an affected tyre to be fixed without removing it.

The Ford EcoSport SE takes design cues from the model that is sold in American and European markets where the car does not have the rear-mounted spare wheel. But that missing spare wheel isn't the only highlight to watch out for. The sub-compact SUV also gets a new, dual-tone rear bumper that sports a silver applique while retaining the sporty visual character which is highlighted by the familiar front grille and 16-inch alloys.

Introduced in Titanium trim, the EcoSport SE continues to make use of SYNC 3 infotainment system with Apple CarPlay and Android Auto as well as Ford PassTM integration.

Under the hood is the same 1.5L three-cylinder TiVCT petrol engine that delivers segment-best 122 PS of power and 149 Nm of torque. The 1.5L TDCi diesel engine delivers a peak power of 100 PS and peak toeque of 215 Nm. Both engines are mated to a five-speed manual gearbox.

The EcoSport was initially developed for the Brazilian market and was launched in South American in 2003. The car made its way to India in 2013 when it was launched at ₹5.59 lakh (ex showroom) and with three engine options - 1-litre EcoBoost petrol, 1.5-litre Ti-VCT petrol, and the 1.5-litre TDCi diesel. While it has fared reasonably well here, recent years have seen the competition intensifying significantly. Heat from direct rivals in the sub-compact SUV segment as well as indirect rivalry from options in the compact SUV segment have threatened to push EcoSport to the sidelines.

EcoSport continues to be an exciting car to drive even if its exterior styling has become rather dated and space inside the cabin remains a sore point for many.