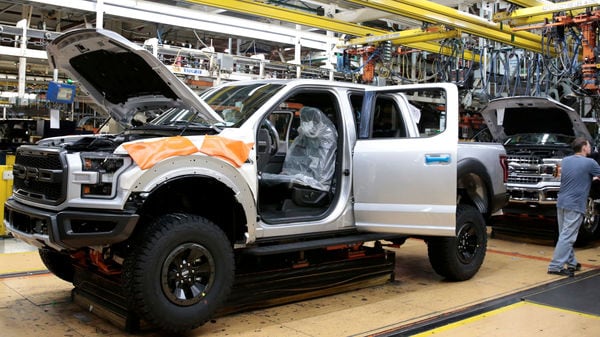 File photo of a Ford F-150 pick-up truck at the assembly line at Ford's Dearborn Truck Plant. Photo used for representational purpose only.

Ford Motor Co said on Tuesday it was postponing its plan to restart production at its North America plants due to safety concerns for its workers amid the coronavirus pandemic.

To generate cash, the No. 2 U.S. automaker had said last week it was poised to restart production at some plants in North America as early as April 6, bringing back such profitable vehicles as its top-selling F-150 full-sized pickup, the Transit commercial van and SUVs.

But on Tuesday, Ford said it had been aiming to resume production at several key U.S. plants on April 14, but would now instead do so at dates it would announce later on.

"The health and safety of our workforce, dealers, customers, partners and communities remains our highest priority," Kumar Galhotra, president of Ford's North American operations, said in a statement.

Still, the automaker will open a plant in Ypsilanti, Michigan, during the week of April 20, that will make ventilators to treat patients afflicted by the coronavirus.

General Motors Co has shuttered its plants indefinitely and has not provided a date for vehicle production to restart.

"Once it is safe to resume production, we will do so," a GM spokesman said.