Citroen C3 SUV is likely to be launched in India in the second half of this year. The C3 SUV will be the second offering from the French carmaker in Indian markets after the C5 Aircross SUV.
By : HT Auto Desk
| Updated on: 14 Apr 2022, 11:06 AM 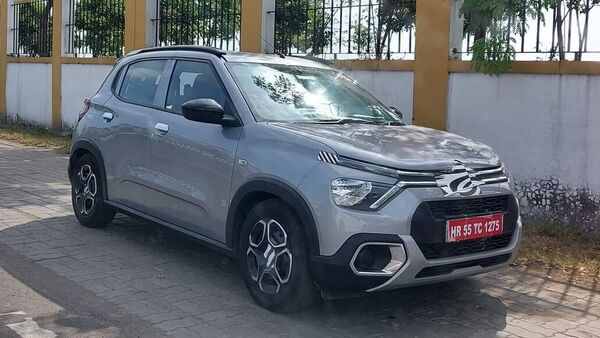 Citroen C3 SUV is likely to be launched in India in the second half of this year. (Photo courtesy: Facebook/@SandeepSreeram)

Citroen C3 SUV is all set to be launched in India in the second half of this year. Ahead of its launch, the C3 SUV has once again been spotted on Indian roads, this time without any camouflage. The images of the C3 SUV was shared on social media which reveals key exterior details of the C3 SUV, the second offering from the French carmaker in India.

The images shared shows a C3 SUV with just the carmaker's badging under camouflage. All other exterior details can be clearly seen. The SUV, which was earlier unveiled by the carmaker, appears to be slightly different in terms of its exterior design than the one shown by Citroen during the event last year.

The C3 SUV has a front face which will have the typical Citroen grille with LED DRLs and LED headlights. The bumper is slightly different from the ones seen on the C5 Aircross SUV, Citroen's first car in India. The bumper is flanked by chunky foglamp casing.

On the sides, the alloy wheel design is also different from the ones used on the C5 Aircross SUV. The C3 shown in images also does not have the big plastic side claddings seen on the bigger model. It also does not have body-coloured ORVMS either. At the rear, Citroen maintains a minimalist look with a new set of taillights along with a bold and chunky bumper.

Citroen C3 SUV, which the French call a car 'Made In India for Indians', has already gone into production in some of the South American countries. While the carmaker has not shared details about the powertrains for India, the global-spec model offers some hint at what engine will drive the SUV. The 2022 C3 to be sold in Brazil will get a 1.0-litre three-cylinder petrol engine and a 1.6-litre four-cylinder petrol engine as options. In Argentina, the C3 will come powered with a 1.2-litre three-cylinder petrol engine which is used in the new Peugeot 208. In the Peugeot 208, this engine produces 82 horsepower at 5,750 rpm and 118 Nm of maximum torque at 2,750 rpm.

The engines will come mated to a five-speed manual gearbox. Citroen may also offer a seven-speed automatic transmission for the Indian markets.

Citroen C3 is based on the Common Modular Platform (CMP) with a wheelbase that measures 2,540 mm. Citroen promises that the passengers sitting in the rear seats too will have ‘one of the best legroom in the segment’. For the rear seats, there is 653 mm of legroom. Up front, there's 1418 mm for the elbows and 991 mm for headroom.

The 2022 C3 SUV will also come with 180 mm of ground clearance, slightly less than what its rival Tata Punch offers. The C3 also has a 10m turning radius, making it an easily manoeuvrable vehicle.