Anand Mahindra, Chairman of the Mahindra Group, said one of the reasons behind long waiting period for Mahindra cars like XUV700, Thar and Scorpio-N is the global chip crisis.
By : HT Auto Desk
| Updated on: 06 Aug 2022, 12:25 PM 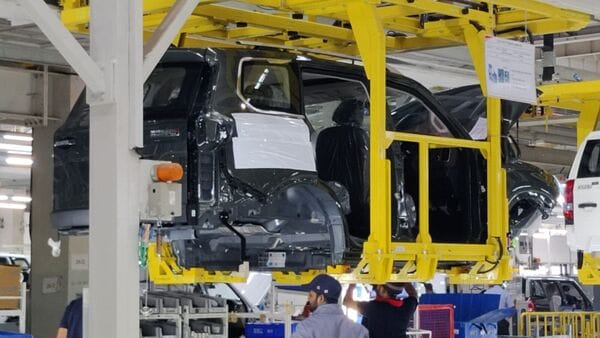 Mahindra Scorpio-N, the latest SUV from the carmaker, has clocked record number of bookings. But concerns remain over Mahindra's recent track of slow deliveries which has resulted in slower than expected sales of XUV700 or Thar SUVs.

India could take the lead to solve the global auto industry's biggest concern right now - the semiconductor chip shortage. Anand Mahindra, the Chairman of Mahindra Group, said India needs to step up to fill the gap created by China. “Nature abhors a vacuum, and other countries, including ours, will rush to fill it," said Mahindra in his speech at the virtual 76th annual general meeting of the Mahindra Group held on July 5. Mahindra and Mahindra, one of India's top carmakers, has been one of the worst affected manufacturer due to the ongoing global crisis.

Anand Mahindra said that the crisis in China is an opportunity for other countries, which India should grab by both hands. “There is likely to be significant supply chain restructuring. Companies and countries will look for alternate supply sources. This will create pockets of opportunity around the world. There is likely to be a significant supply chain restructuring, and India may well be one of the beneficiaries of this 'sourcing' diversification," he said.

Mahindra has been struggling with long waiting periods for its flagship cars like XUV700 and Thar SUVs despite clocking huge number of bookings. Mahindra Scorpio-N, the latest SUV out of the carmaker's stable, has clocked record number of bookings. But there are already concerns whether the Scorpio-N will have the same fate as XUV700.

Attributing the crisis to China, Mahindra said that the existing supply chain is dominated by the neighbouring country. "In M&M, one of the main reasons for the long waiting periods for delivery of vehicles is that the availability of semiconductors had slowed down to a trickle," he said.

(Also read: Too long a wait for XUV700? Switched to Scorpio-N? Mahindra says all good)

Mahindra referred to US Foreign Secretary Antony Blinken's made remarks calling China a ‘serious long-term challenge to international order’ and proposed to align with partners with shared interests who are opposed to China's overseas development policies. “China's loss is India's gain. We are going to be the beneficiaries of a geopolitical realignment in threat perception," said Mahindra. “That is India's cue. We can be the balance against China. We can be the new player in the supply chain. The situation is rife with opportunities." he added. Mahindra also said that manufacturing in India could take off once the global supply chain is restructured.