BMW XM will come with a more rationalised appearance as compared to the concept. (Image: iXForums)

It's been nearly a year since the BMW XM concept was introduced. Now a set of teaser images have been leaked online revealing the production-ready model, and it appears neatly close to the actual concept. However, the radical design has been watered down a bit in the production one. Revealed by iXForums, the production-ready BMW XM patent images show some minor changes but are essentially the same as the concept model.

The first noticeable change is the large kidney grille flanked by quad lighting units similar to those found on the new generation BMW 7-Series. There is a new central air intake with sensors for the luxury crossover's high-tech driver assistance systems. Also, it gets less radical air curtains and fender flares that are more roundish. Other changes include traditional door handles and thicker pillars. Moving to the back of the car, it gets a stacked quad tailpipe exhaust system and more conventional taillights. The rear bumper and diffuser too have been tweaked, while the angular rear window has been retained. 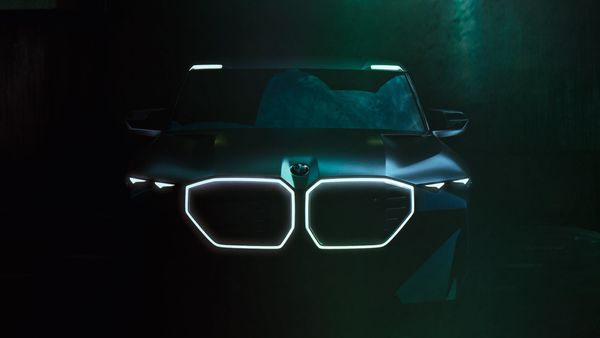 The German luxury car marquee teased the production model earlier this year and claimed that the crossover would have a newly developed V8 engine under the hood paired with a plug-in hybrid system. Combined, this hybrid powertrain system is capable of churning out 644 hp of power and 800 Nm of massive torque output. The engine would be paired with a hybrid-specific M xDrive system that claims to be highly spontaneous.

Thanks to the hybrid powertrain system, the new BMW XM will have an all-electric range of 80 km, claimed the automaker. The car will also get an Adaptive M Professional suspension, an electromechanical roll stabilizing system with 48-volt technology, and Integral Active Steering, an M braking system, as well as optional M light-alloy wheels measuring up to 23 inches.