BMW has launched its third electric car in India. On May 26, the German carmaker drove in the i4, India’s first luxury electric sedan. BMW had earlier launched the iX electric SUV. Here is a quick look at how these two EVs are different in terms of features, specs, performance and price.
By : HT Auto Desk
| Updated on: 28 May 2022, 03:54 PM 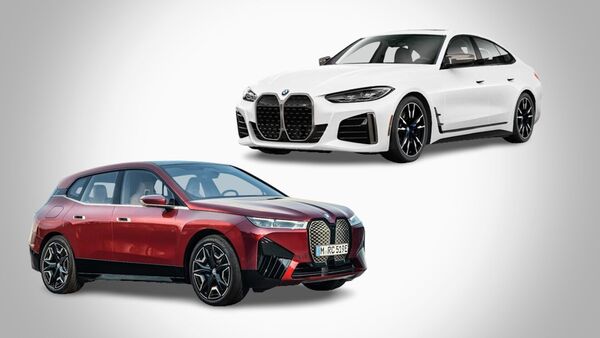 While BMW i4 (top) and the iX (bottom) share several similarities, there are certain traits that sets the electric sedan apart from the electric SUV.

BMW i4 is the latest electric car to launch in India. Priced at ₹69.90 lakh (ex-showroom and introductory), the new i4 is a first in more than one aspect in India’s emerging electric vehicle market. It is the first proper luxury electric sedan to be launched in the country. It is also currently the most affordable electric car in the luxury segment after the Mini Cooper SE. It also offers the highest range by any electric car currently sold here, offering around 590 kms on a single charge.

BMW’s push for electric cars in India was quite evident when the carmaker launched the iX electric SUV late last year. While there are several similarities between the iX and the i4, there are certain traits that sets the electric sedan apart from its electric SUV sibling.

BMW i4 comes equipped with a bigger battery pack than the iX electric SUV. The electric sedan has a 80.7 kWh lithium-ion battery compared to the 76.6 kWh battery pack inside the BMW iX. Being a bigger and heftier EV than the i4, the range and performance of the iX are also less.

BMW i4 also boasts of quicker charging time, a factor that is considered as one of the key aspects pertaining to range anxiety and charging infrastructure worries. It supports 210 kw DC fast charging compared to 150 kW in BMW iX.

BMW will offer 11 kWh home wallbox AC charger along with i4, which can charge the car fully in around 8.30 hours. However, when using a 50 kW DC Fast Charger, which is available in India, the i4 can replenish its battery from 10 percent to 80 percent in about 83 minutes or add 100 kms worth of range in just 18 minutes.

The BMW iX, while using a smaller battery pack, takes less time to charge up. The 11 kWh AC home charger can recharge the iX fully in around 7 hours and takes 73 minutes to charge up to 80 percent or add 100-km of range in a little over 20 minutes.

When it comes to range, BMW i4 has no competition. There is 590 kms of range on offer and is likely to be the real-world figure too. The ARAI certified figures, which are yet to be out officially, is expected to be higher than this. Not even some of the upcoming luxury electric vehicles will offer this range that promises to put range anxiety aside for good. The BMW i4 can almost match an ICE car, which usually has an average range of around 600 kms per full tank.

However, the iX does not boast of similar range. In fact, it offers a range of around 425 kms on a single charge.

Both electric vehicles use a permanent magnet synchronous electric motor to run. The i4 uses only one motor like the iX. While both cars offer rear-wheel drive, there is difference in power output and performance.

In terms of features, BMW i4 offers a bit more than the iX. But it also loses out in terms of dimensions and space due to the difference in body style. The i4 sits lower than the iX, more than 75 mm compared to the electric SUV, and also has a shorter wheelbase which means the space inside is less too. It is evident from the boot space figures where iX scores over i4 by 30 litres. The i4 also has smaller tires measuring 17-inch compared to the 20-inchers on the iX.

The biggest difference between the BMW i4 and the iX is in their prices. BMW had launched the iX in India at a price of ₹1.16 crore (ex-showroom). The new i4 has been launched at an introductory price of ₹69.90 lakh (ex-showroom), which makes it one of the most affordable EVs in the luxury segment. Only the Mini Cooper SE, also manufactured by the BMW Group, costs less than the i4 in the luxury segment.