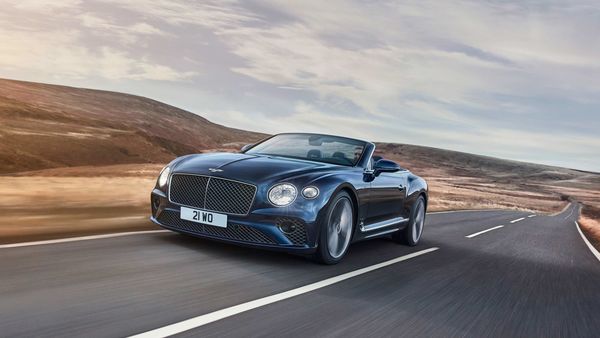 Bentley has unveiled the convertible version of the Continental GT Speed.

A few weeks after unveiling the new Continental GT Speed, Bentley has taken the covers off its Convertible version. Considered by the luxury car brand itself as the most dynamic and sporty car to ever drive out of its facilities, the Bentley Continental GT Speed ​​Convertible is just as fast as the coupe, with the added hedonism of open-air driving enjoyment.

Besides being an open-roof version of the Continental GT Speed, the Convertible has some unique features. The 22-inch wheels on the Continental version are exclusive as are the side skirts. The radiator grille and bumper grille are finished in dark tint. The roof, which will be offered with up to 7 colour options, can be electronically deployed or stowed in just 19 seconds at a top speed of 50 kmph.

Besides the roof, the Continental GT Speed Convertible also gets 'Speed' badging on sport door sills and other parts of the car.

On the inside, the Continental GT Speed Convertible will have eight colours for the hood upholstery, in addition to 26 different upholstery for its sports seats, covered in leather and Alcantara, and equipped with a 'neck warmer'. One can also customise the centre console with options of various woods as well as brushed metal finishes.

Chris Craft, Member of the Board for Sales and Marketing at Bentley Motors, said, "The new Speed is the most driver-focused Continental GT Convertible available and unique in its ability to offer extremely refined, all-season open-top Grand Touring with the added edge of astonishing performance and dynamism."

"Combined with exquisite, handcrafted interior details, the Continental GT Speed Convertible exemplifies all Bentley knows about creating the world’s most stylish and elegant cars for roof-down motoring," he said. On the inside, the Continental GT Speed Convertible will have eight colours for the hood upholstery.

Like the coupe, the new Bentley Continental GT Speed Convertible has a 6.0-litre twin-turbo W12 engine that can churn out 650 horsepower and a massive 900 Newton-meters of peak torque. It has an eight-speed dual-clutch transmission that directs power to an all -wheel drive system.

With the powertrain, the Continental GT Speed Convertible can hit 100 kilometres per hour in less than four seconds and a top speed of 335 kilometres per hour. There is also all-wheel steering and an electronic rear differential. It rides on an active air suspension with adaptive dampers, including an anti-roll control system.