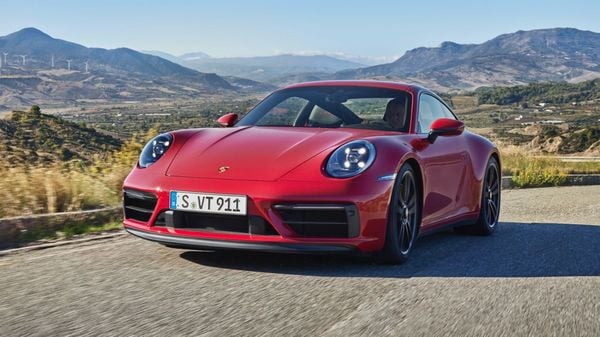 Porsche 911 is one of the most famous and iconic models in the world of high-performance cars.

The increasing pressure on the auto industry for electrification and rising fuel costs are pushing automakers to revise their strategy. High-performance carmakers are especially in dilemma. Porsche is no different. Does this make a case for an all-electric Porsche 911 in the distant future?

(Also Read: This Porsche 917 was inspired by butterflies. This artwork tells the tale)

Porsche’s design chief Michael Mauer in an interview with Autocar UK has said that electric powertrains allow the vehicle designers more freedom. He also indicated that the current rear-engine layout of the Porsche 911 is the reason why transforming it into an EV is difficult. However, he didn't rule out the chance of transforming the Porsche 911 into an all-electric car.

Porsche CEO Oliver Blume earlier snubbed the possibility of making 911 an electric car. He said that the Porsche 911 would be the last model to go electric. Now, Mauer has said the 911 is not going anywhere. This also indicates that the car might adopt an all-electric powertrain ditching its ICE setup, as the European Union countries are adopting stringent measures for fossil fuel powertrains. Several European countries have already announced deadlines for phasing out petrol and diesel vehicles.

In that case, transforming into an EV is the only way for Porsche 911 to survive in the coming future. However, this transformation will not take place soon. The Porsche designer said that in the next 15 years, the rear overhang of the cars should be almost two metres to fit all necessary equipment. Hence, designing an electric 911 will become easier by then.

Talking about the next generation Porsche 911, Mauer said that it would come as a combustion-engine powered one. The chance of introducing a hybrid 911 is also a possibility before Porsche invests in a fully electric version of the iconic car.

A hybrid 911 Turbo prototype was spotted testing at the Nurburgring a few months back. This would eventually increase the power and performance of the Porsche 911. The current model that debuted in 2018 comes with the capability to fit a mild hybrid and a plug-in hybrid system.