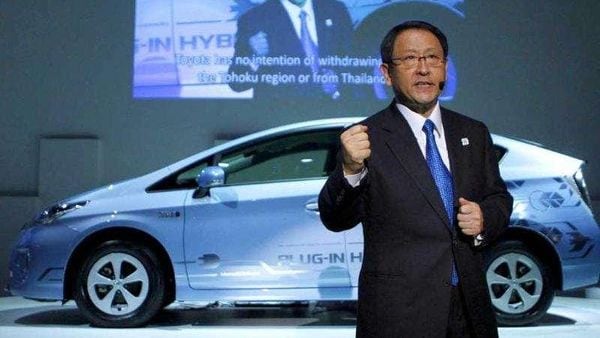 Akio Toyoda is keen on using hybrid technology instead of complete electric vehicles.

The megatrends like electrification or automation in the automobile industry will result in massive job loss. The automobile industry experts have been raising this concern for quite some time. Now, Toyota Toyota CEO Akio Toyoda has reportedly echoed the same. He has warned that a complete shift to electric vehicles will result in millions of job losses in Japan, reports Automotive News.

The Japanese government is ambitiously pushing the auto industry for carbon neutrality by 2050. This is driving auto manufacturers to invest heavily in EVs. Toyoda raised his concern while talking about it. He believes that a radical shift to EVs could cripple the Japanese manufacturing industry.

“Japan is an export-reliant country. Thus, carbon neutrality is tantamount to an issue of employment for Japan. Some politicians are saying that we need to turn all cars into EVs or that the manufacturing industry is an outmoded one but I don’t think that is the case. To protect the jobs and lives of Japanese people, I think it is necessary to bring our future in line with our efforts so far," Toyoda said.

Japan currently manufactures around 10 million vehicles every year. Around 50% of that are exported to overseas markets. Forecasts predict that Japan could be producing 8 million vehicles annually with ICE, hybrids and PHEVs in the 2030s.

“This means that production of more than 8 million units would be lost, and the automotive industry could risk losing the majority of 5.5 million jobs," Toyoda pointed. He also said that if internal combustion engines can be termed impossible to produce, the auto industry would not be able to produce almost any vehicles.