2022 Toyota Tundra reborn with V6 engine, gets hybrid power too

2022 Toyota Tundra is based on a new platform, gets a new engine and heavy updates in styling on the outside and inside. Toyota will launch the new Tundra pickup truck, rival to the likes of Ford F150 or Ram 1500, later this year.
By : HT Auto Desk
| Written By : Sabyasachi Dasgupta
| Updated on: 20 Sep 2021, 10:05 AM 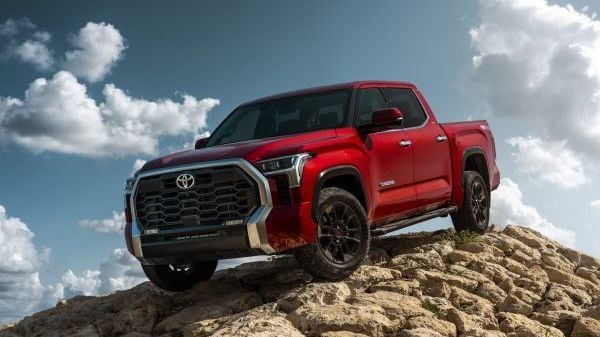 2022 Toyota Tundra pickup truck, only in its third generation since first launch 21 years ago, gets a 3.5-litre twin-turbocharged V6 engine capable of producing 389 hp and 650 Nm of peak torque.

After 15 years since it received updates of any kind, the 2022 Toyota Tundra pickup truck has made its debut with a new powertrain, based on a new platform and suspension setup, makeovers both inside and outside and new technologies.

The 2022 Tundra will be available in SR, SR5, Limited, Platinum, 1794 and TRD Pro grades with production expected to start at Toyota’s San Antonio Texas plant from November.

The platform, referred to internally as a F1features high-strength boxed, steel-ladder construction, plus aluminium to reduce weight of the vehicle. Toyota claims that the rigidity and off-road capability of the new generation Tundra is now substantially improved than the previous model.

For the 2022 Tundra, Toyota has ditched its trusted V8 engine that powered the previous model. Instead, the Japanese carmaker has added two 3.5-litre twin-turbo V6 engines, one of them being a hybrid. Despite going for a less powerful engine, Tundra benefits from less weight due to the new platform and emerges as a more powerful performer on the road. The IC V6 engine is capable of churning out 389 bhp and 650 Nm of peak torque, comfortably beating the 5.7-litre V8 that powered the preceding model.

Both engines are mated to a new 10-speed transmission and has a maximum towing capacity of about nearly 5,500 kgs.

Toyota has also added a spring rear suspension that allows a maximum box load capacity of 880 kgs. Some of the trims will also offer rear air suspension with various adjustable modes.

While the changes on the outside is mostly limited to the front face of the Tundra, which now gets a newly designed double wishbone setup, it is the interior where most of the changes have taken place. It gets a panoramic roof, heated and ventilated front seats, heated steering wheel, and a 14.0-inch infotainment screen as standard. There is a 360-degree camera that displays the exterior from multiple angles to help keep the Tundra safe during off-road adventures. There are also cameras to check on cargo in the bed or an attached trailer. Power extending and folding tow mirrors are also available. The touchscreen system also gets Apple CarPlay and Android Auto integration, with voice commands for some of the trims. There is also a 12.3-inch digital instrument cluster as well.

The 2022 Toyota Tundra will go on sale later this year, with the hybrid version to follow shortly after. It will rival to the likes of Ford F150 or Ram 1500. The pricing will be announced closer to the launch date.