There is a concern that the latest Toyota Land Cruiser may be resold to customers in countries outside of Japan and may be used in operations which threaten peace and security.
By : HT Auto Desk
| Updated on: 26 Jul 2021, 09:16 AM 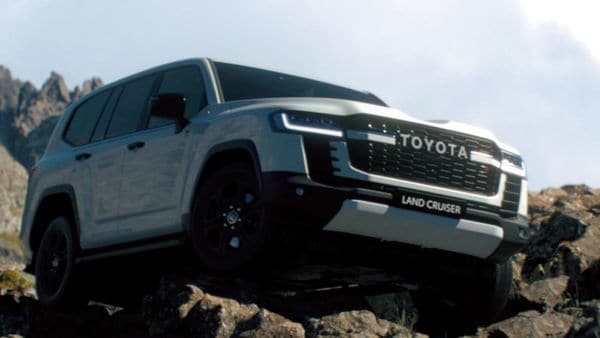 2022 Land Cruiser from Toyota has been made available in select countries.

The Toyota Land Cruiser has been a formidable SUV across the globe and has had quite a successful run in many countries. Famed for its go-anywhere capabilities and imposing body structure, the latest 2022 LC300 Land Cruiser has received thousands of orders in Japan but for those here looking at driving the model home, there's a catch - they reportedly cannot sell the vehicle within 12 months from the date of purchase.

According to reports in the local media, Toyota is making customers of the latest Land Cruiser sign a contract which prevents them from re-selling the vehicle within a year of purchase. Local magazine Creative311 reports that one of the reasons for such a move is to prevent buyers from re-selling the model at a profit, possibly to customers in other countries. Limited numbers of the SUV means that the Japanese car maker wants the vehicle to only be purchased by 'genuine' customers who want to drive and experience it themselves. Perhaps most significantly though, there is concern that the new Land Cruiser, if re-sold to customers in other countries, could land up in the hands of people with nefarious intentions and may become a threat to global security.

It is reported that customers who sign the agreement and still re-sell the vehicle may be banned from buying another Toyota for an unspecified period of time. Some of the customers have been quoted as saying that they never thought they would have had to sign an agreement of this kind when purchasing a vehicle. Most, however, opted to put ink to paper.

The new Land Cruiser will soon be available in select markets across the world. The company's TNGA platform serves as the base for the new model. The V8 engine has been dumped in favour of a twin-turbo V6 naturally aspirated engine. And while there aren't many drastic changes to the exterior profile or design language of the latest Land Cruiser, the cabin has been updated quite a bit and now gets a 9-inch infotainment system which can be upgraded to a 12.3-inch screen, wireless charging, a 360-degree camera and a head-up display.