Force Motors has launched the new generation 2021 Gurkha SUV at a starting price of ₹13.59 lakh (ex-showroom). Check how it stacks up against its key rival Mahindra Thar SUV in the niche segment of adventure lifestyle off-road vehicles.
By : HT Auto Desk
| Written By : Sabyasachi Dasgupta
| Updated on: 27 Sep 2021, 07:19 PM 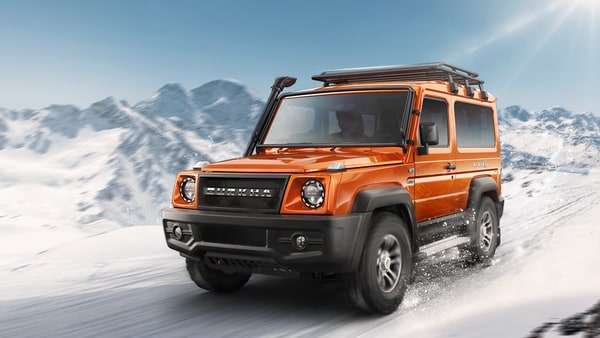 2021 Force Gurkha SUV has been launched at a starting price of ₹13.59 lakh (ex-showroom)

Force Motors has launched the 201 Gurkha off-road adventure lifestyle SUV in India at a starting price of ₹13.59 lakh. The bookings have been opened for a token amount of ₹25,000. 2021 Force Gurkha will take on rivals like the Mahindra Thar in the niche segment.

Force Motor is expected to begin deliveries of the 2021 Gurkha SUV in the second half of the next month, the Pune-based carmaker said in a statement. It also said that the customers would be able to test drive the Gurkha at the dealerships before mid-October. Force Motors said it has tied up with Auto Europa India, which has over 6,200 touchpoints, for on-road assistance.

The second generation Force Gurkha SUV has received several upgrades compared to its preceding model. The new Gurkha is now appears more of an adventure lifestyle vehicle with the introduction of several creature comforts and modern features.

2021 Force Gurkha SUV comes with an upgraded BS 6 compliant 2.6-litre diesel engine mated to a 5-speed manual gearbox. However, Force Motor does not have any plan to offer the SUV with an automatic transmission yet. The carmaker believes 'those who wish to experience the joy of driving, prefer the manual transmission'. This is where Mahindra Thar is likely to score more points as far as options are concerned, as well as its pricing structure.

The output from the 2.6-litre diesel engine remains almost identical to the previous model, which stands at 89 bhp and 250 Nm of peak torque. The 2021 Gurkha is be offered with an AWD option. Force has also tweaked the suspension setup with double wishbone and coil springs. It can also crawl up gradients of 35 degrees.

As far as the looks are concerned, the new generation Gurkha continues to be inspired by the Mercedes G-Wagen. Force Motor has upgraded the style quotient of the 2021 Gurkha with several changes on the outside and more on the inside.

The SUV now sports a bolder look with a new front grille. It is flanked by circular bi-LED headlamps and LED DRLs which sit above the new set of fog lamps. On the sides, it has 16-inch alloy wheels placed within the pronounced wheel arches with black claddings. It also gets a functional snorkel which helps the Gurkha with a water-wading capacity of 700 mm. At the rear, Gurkha gets a new new set of taillights as well as a ladder to access the roof-mounted luggage carrier.

Step inside, one will find a rejuvenated cabin which has an all-black interior and captain seats on offer. There are floor mats specifically meant for the outdoor capability of the SUV. Besides these, Gurkha also gets a seven-inch infotainment screen which supports Android Auto and Apple CarPlay. The driver display is now semi-digital and sits behind a new three-spoked steering wheel. While the large panoramic windows for the rear seat passengers are fixed, the front row windows are powered.