2021 BMW 4 Series Coupe is underpinned by BMW’s CLAR platform that's also shared with the 3 Series.It will be launched internationally in October this year.
By : HT Auto Desk
| Updated on: 28 Aug 2020, 01:02 PM 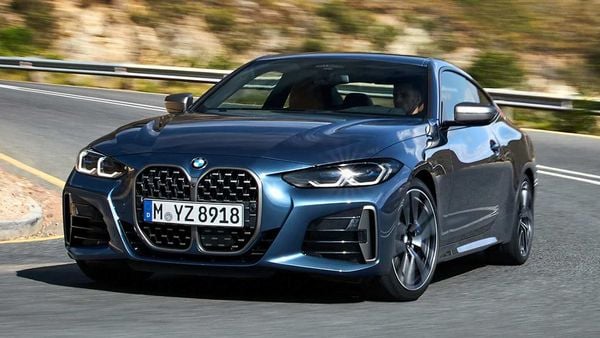 The 2021 BMW 4 Series Coupe has been officially revealed ahead of launch in October this year. The latest model sports a very bold and contemporary exterior design dominated a large sized vertically oriented kidney grille at it snout which has received mixed reactions. BMW's Head of Design, Domagoj Dukec, has said in the past that 4 Series' controversial grille won't be rolled out to other models in the range.

The new-gen model is going to be slightly bigger in terms of overall dimensions against the model it replaces. Its overall length has been upped to 4,768 mm which is around 130 mm more, width has been increased by 27 mm to 1852 mm, and the wheelbase has been stretched by 41 mm to 2851 mm. In order to make the car better in terms of overall performance, the weight has been trimmed down with the use of lighter materials.

(Also Read: Firefighters smash windows of a parked BMW during emergency. Here's why)

The model is underpinned by BMW’s CLAR platform that's also shared with the 3 Series. Inside, the car features a completely new layout. It now gets sports seats as standard and the start button has now been added in the center console next to the refreshed drive selector. The BMW's iDrive infotainment system has been upgraded with a new and bigger head-up display which is optional. The smartphone connectivity features such as Apple CarPlay and Android Auto are included via BMW operating system 7.0.

The driver's screen is a 12.3-inch digital instrument cluster, while the main infotainment functions can be controlled with a 10.25-inch touch display and console-mounted iDrive controller.

Under the hood, the car gets a 2.0-litre 4-cylinder engine which is available in two states of tune. There is also a 3.0-litre straight six turbo-petrol motor which has been paired with a 48V mild-hybrid system.