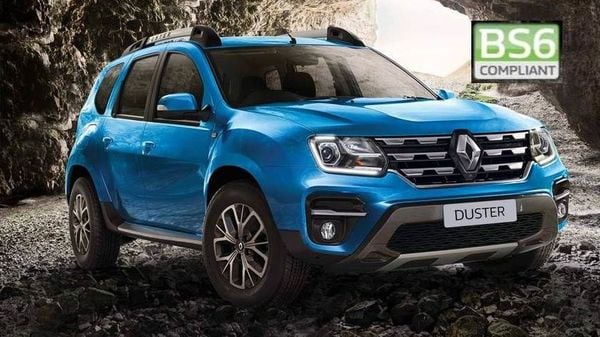 Renault Duster BS 6 has been launched in the Indian market priced from ₹8.49 lakh*. In comparison to the previous model, the updated entry-level Duster RXE now starts at a considerable higher price tag of ₹50,000. However, the mid-spec RXS variant is only costlier by about ₹10,000. With the BS 6 update, the Duster has also received a new top-spec RXZ petrol variant which retails at ₹9.99 lakh*.

The BS 6 Renault Duster is available with the H4K 1.5-litre petrol engine. Like the previous BS 4 model, it belts out 106 PS and 142 Nm of torque and comes teamed-up with a 5-speed manual transmission, while the CVT option has now been given a miss.

Also Read: This is how Renault plans profitability in India with new initiatives

The previous BS 4 model also used the K9K 1.5-litre dCi diesel which was known to deliver 110 PS of power and 245 Nm of torque, but it's missed out in the Duster's newest avatar.

Later, the SUV will also be available with an all-new 1.3-litre TCe turbocharged four-cylinder petrol engine with a standard 6-speed manual transmission and CVT (optional). Though it is yet to be confirmed officially.

This 1.3-litre TCe engine (internally known as HR13) is co-developed under the Renault-Nissan-Mitsubishi Alliance and Daimler. In the India-spec Duster, this unit will have a maximum power output of 156 PS along with 250 Nm of torque.

The BS 6 compliant Duster BS 6 will is available in RXE, RXS and RXZ trims. The previous model came along with an additional RXS(O) trim as well. Also what's missing from BS 6 Duster is an AWD option. This has been excluded to keep the overall costs under check.

Find the Duster BS 4 vs Duster BS 6 prices* in the table below: