Yamaha has marginally increased pricing of all the variants of the R15 expect for the Monster Energy MotoGP edition.
By : HT Auto Desk
| Updated on: 05 Apr 2022, 07:43 PM 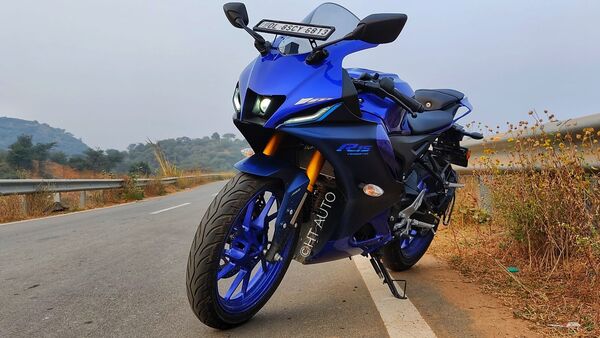 The Yamaha R15 has entered a new generation change with the latest update.

Yamaha Motor India has hiked pricing of its much popular YZF-R15 V4 sport bike in the country. This comes out as the third price increment for the model since its launch in the country a year back. The company has marginally increased pricing of all the variants of the model expect for the Monster Energy MotoGP edition. All the said trims have become expensive by around ₹1,500 and the base pricing for the model now starts from ₹1,76,300.

The latest price list has become effect from April 1st. Previously, pricing of the model was hiked in January this year when all the variants of the bike became expensive by ₹2,000. Save for the latest price hike announcement nothing else has changed on the motorcycle.

The bike still continues to source power from the same 155cc, liquid-cooled engine with variable valve actuation technology. The engine has been rated to churn out 18.1bhp of maximum power backed up with 14.2Nm of peak torque. The engine comes paired to a 6-speed transmission and a quick shifter which is offered  as standard on the top-spec M trim. Apart from that, it gets several  other first-in-class features such as an assist and slipper clutch, a traction control system.

While there are no direct rivals to the R15 in the Indian market as of yet, it locks horns with bikes such as the KTM RC200 and the Suzuki Gixxer SF.