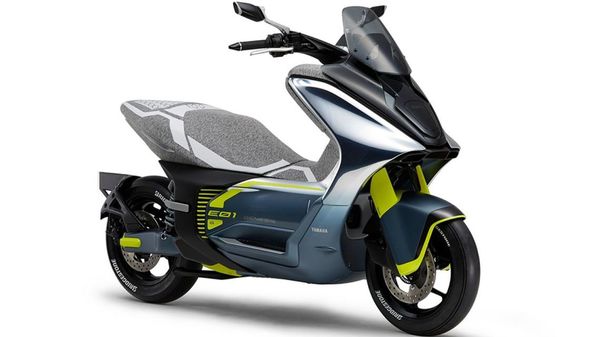 The Yamaha E01 patent images have been leaked and as it seems, the production version of the e-scooter will remain true to the concept, with a couple of updates albeit. The scooter would come powered by a 15 hp producing electric motor.

The Yamaha E01 is expected to be coming with improved performance compared to the brand's previous electric scooter offerings such as Passol, EC-02, EC-03, and EC-05.

The concept model was not as radical, as many concept two-wheelers come. However, there were a couple of elements not suitable for the real world. Those will be tweaked in the production version for sure.

The patent images show the Yamaha E01 with revised lights under the nose, which was not there in the concept. Taking a cue from the Yamaha R1, the E01 electric scooter gets dual LED headlamps. Just above them will be a hatch covering the charging socket.

The LED marker lights surround the opening at the front, giving the E01 a distinctive appearance. There will be a digital instrument cluster, a single-frame seat with the stepped-up pillion, a sleek tail section with body integrated slim LED strip acting as the taillight.

The entire rear profile of the scooter has received a host of updates in the patent filing, as compared to the concept. The tweedy-looking material which extended up to the inner surface of the fairing, and elements like the tiny mirrors and a strange sharkfin bolted to the rear fender are gone in the new patent filing. Now, it appears as a thoroughly usable-looking electric scooter.

The fabric-covered rear end has been replaced with a much more conventional design with a removable seat above normal plastic bodywork that covers the E01's storage compartment. With the main centre section accomodating the non-removable lithium-ion battery, it is unlikely to offer enough storage.

Yamaha is yet to reveal further details about the E01 electric scooter. However, the recent trademarks along with these patent filings indicate an imminent arrival for the EV.